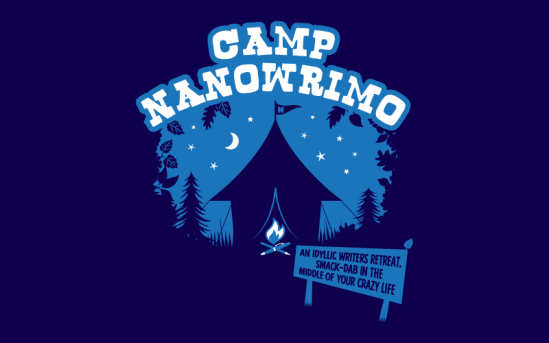 I used to do NaNoWriMo whenever it came around.  It wasn’t easy getting 50,000 words down in a month, but knowing that thousands of other people are suffering along with me does wonders for my motivation.  Maybe I’m a sociopath or something.  Anyways, in spite of the fact that I have yet to pack up my action figures and I still combat invisible adversaries with a toy sword in my living room, I’ve somehow become a “mature adult,” or so people tell me.  And part of being a “mature adult” is that I don’t have the kind of time to be spending a couple hours a day writing.  I’ve tried a few times, but my word count has been so pathetically low that the comments of this post would be full of people laughing at me were I to mention it here, so I won’t.

Luckily, NaNoWriMo’s little brother is on the scene!  For the past couple years, there’s been Camp NaNoWriMo, where you set your own word count goals and work towards it during a month that’s not November.  As you may have gathered from my taking the time to write this post, I’m taking part in it, for their April session.  I’m going for 10,000 words over the course of the month, which should be a pretty modest goal.  Hell, I’ve written posts on this blog that are close to 10,000 words.  It started on the first of the month and I’ve written a grand total of… 0 words.  Yeah, I’ve been procrastinating a bit.  That’s what this post is all about, helping me procrastinate.  I am writing words here so I don’t have to be writing words there.  So by reading this, you are officially helping me screw around and not write anything.  Thanks for that.

With this writing exercise, I’m wanting to explore areas I’m not familiar with.  Normally, I like to write grand plots, where events therein change the course of nations or worlds.  With this story, I’m wanting something much more personal in scale.  I’m really comfortable with writing momentous fight scenes; this project will have to largely deliver conflict without direct violence.  In general, stuff like that.  I’m also wanting to keep this relatively short, wrapping things up shortly after the 10,000 word mark.  I usually write much more long form than that, and it’d be nice to try writing a more accelerated story.

First step of the process for me was coming up with a story concept.  Which I really should have done before the month started, but hey, procrastination.  I came up with a couple of concepts.  The first was to just write whatever ridiculous thing came to mind with absolutely no filter in a stream-of-consciousness type thing, but that feels dumb and cheaty.  The first real usable concept I came up with was inspired by someone unironically using the word “muggle.”  Sometimes, that’s all it takes.  Lifting the idea of a whole secret magical underworld from the Harry Potter series that inspired the term and putting my own spin on it, I came up with the concept of a mage’s police force, tasked with ensuring that magic remains an unseen, unknowable force in the world of mortals.  The idea would be to deliver an urban police beat/investigation story with plenty of fantastic elements.

Thing is, though, that would require some worldbuilding, and I think I’d want more than 10,000 words to work with to pull that off properly.  One way to avoid that would be to stick with elements that most of the audience is already familiar with.  So drop the magic, because that varies too much between fictional worlds, and stick with something where the rules are largely the same between portrayals.  So maybe like, vampire cops or something like that.  A lot of urban fantasy works have the whole Masquerade deal, where there’s the whole secret world beneath the normal one and everyone involved has to go to great lengths to keep it hidden.  I like the idea of a story where the masquerade falls, and the public is made aware of all the magic/weird creatures in their midst, and everyone has to deal with the fallout.  Thing is, I think I like that idea too much, and again, I’d want to devote more than just 10,000 words to exploring that.

So what if we played up the more personal tone I’m wanting to go for.  Make it just one person who reveals too much to another, and take it from there.  That’s the idea I ended up going with, although I’m pulling back a little from the whole ‘secret world’ thing.  Since we’ll just be dealing with a couple people in this story, it makes sense to have them more as independent operators rather than having to involve the shadow organizations and whatnot.  Still have to do a bit of world building to establish what’s going on, but since we’re only having one magic man it will be a lot simpler to do it through his actions rather than background narrative, dialog, or anything that doesn’t move the story as far.  As for what’s going to happen in this story… I dunno.  Usually I have at least a few major points planned out, but this time, I’m writing entirely by the seat of my pants.  Hey, I was wanting to explore new ground with this project, this is just one more area I get to do so.  Will this turn out the greatest short story of our generation?  Will it at least be good?  Probably not.  But it will be a learning experience, and that’s more what I’m looking for right now.

Now I just have to figure out how to start the blasted thing.

I like to write.  It’s kind of a strange thing I feel.  I don’t normally seek to have my work read.  Usually, anything creative I make is for my eyes alone, or that of a small group of close friends.  I don’t really crave an audience for my work, but I like to write anyway.  I like to create worlds, characters, and stories, I like putting my thoughts into words, I like slipping blatant remarks about how good I look into blocks of text, and I like taking what’s in my mind and giving it a more permanent form.  It’s an activity I find very engaging, and it really gives me a lot of fulfillment.

Sometimes, I have to do a lot of writing for my job.  And not the fun kind of writing.  I’m not in the right industry for that.  I get to do a lot of writing for foundation grants, government paperwork, and various other pieces of bureaucratic necessity.  And lately, it’s been hitting the time of year where it seems that all I’m doing for eight hours a day is stare at a word processor while my fingers numbly type words onto the screen.  In small amounts, I don’t mind it.  It’s just part of the job, and while it may not be the most fun thing to do, it’s something that’s well within my abilities.  The problems only come up when I’m spending hours upon hours of doing that.  Is it possible to get writing fatigue?  If so, it feels like that’s what I have.  After a long enough time of being forced to write the most droll things imaginable, it gets to the point where I’m just numbly typing words onto the screen.  I lose the feeling of a good piece of prose just being “right” for the idea I’m trying to get across, and anything I type feels dull, bland, and just slightly off the mark of what I was trying to convey, no matter how good the work actually is upon review.

The worst part is, this feeling follows me home.  Writing too much at work leaves me too burnt out to do any quality writing for enjoyment.  Just yesterday, I was working on one of the large blog posts I have planned, and I had to can most everything I did because it all feels just slightly wrong.  I have been putting too many words on the page over the past week, and they’re all starting to run together in my head.  It’s not a problem with ideas, I know exactly what I’m wanting to get down.  It’s a problem with finding the words.  Everything I write just seems to fail at getting the idea across.

I know I’m not alone in this problem.  Talking to others, I’ve heard several accounts of people just writing too much of the wrong thing, and not being able to mentally switch tracks back to what they really want to write.  What do you do about it, though?  That’s one thing I haven’t heard a solid answer to.  Me?  Apparently, I write blog posts about writer’s block.  Let’s see if that fixes anything.