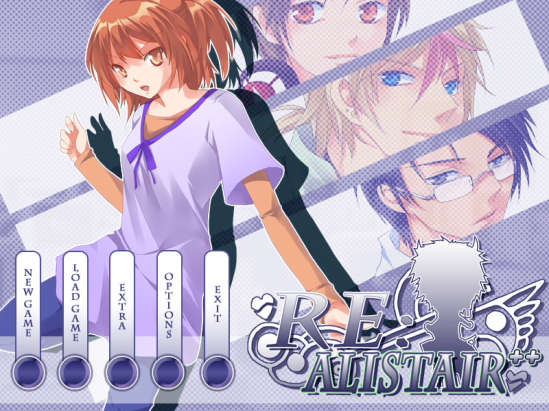 It’s always a little odd, experiencing a story that connects with something in your personal life. Whether it’s about a subject that relates to your job, speaks to something you do as a hobby, or includes something you’ve been through in the past, it’s like you’re experiencing it on a level somewhat different than the average viewer. You’re seeing the same things, but absorbing something completely different. I had that feeling recently when I made my way through the freeware visual novel Re: Alistair++. There were three things that called out to stuff I’ve been going through in real life, in fact. First, it’s about video games, which anyone who reads this blog knows I’m well immersed in. Second, a large part of it is about exploring how relationships between people online transfer into the real world, again, a subject I have experience in. Third, it really calls back to that one time I was a high school girl in some vague setting and had to go get all the boys. In fact, that’s probably the strongest connection I have with this game. Re: Alistair++ gives me the freedom to relive those days, to linger in the memory of having the wind blowing in my hair, of the constant sleepovers and pillowfights, of the eternal fight to spend as much time as possible shopping, or whatever high school girls are supposed to be into. I don’t know, I wasn’t in that state very long.

Re: Alistair++ is a freeware visual novel put together by sakevisual. You can download it here! It’s an otome, a game targeted towards the interests of young Japanese ladies, which I’m sure you’ll all agree fits me perfectly. In this game, you play as Merui Lucas, a short-tempered but otherwise average high school student with a deep passion for the MMORPG Rivenwell Online. And it is during one session of the game that our adventure starts. Merui and her online partner in crime have been taking on a boss above their level, hoping to get the precious Blessed Stone it drops. After a grueling fight, they’ve got it ready to fall when some total knobhead, known as Alistair, killsteals it out from under them, landing the final blow and taking the Blessed Stone for himself. 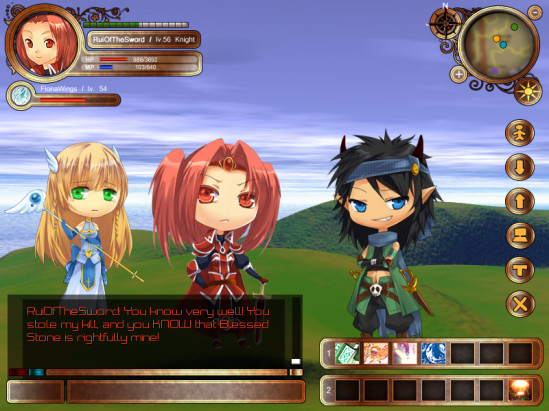 Of course, Merui’s not one to let things go, and an argument follows. It’s cut short, however, as Merui’s school, where she’s playing the game over lunch, is struck with a network outage. As Merui finds when she’s able to log back on, Alistair was affected by that outage, too, meaning she knows he goes to her school. Further investigation reveals that only three other people were logged onto the school network at the time of the outage. Merui’s got quite the lead onto who he could be. In response, Alistair lays down a bet. If Merui can figure out who he is in real life within one month, she gets her Blessed Stone. If not, he gets all the gold she makes in that month. Merui, not one to turn down a challenge, begins the investigation.

In game, RuiOfTheSword may be a mighty knight who answers to no one but herself, but in meatspace, Merui is a high school girl, with all the responsibilities that entails. You’ve got your investigation ahead of you, sure, but you also have to work on homework, maintain your social life, go shopping (see! I told you!), and, if you’re lucky, get yourself a boyfriend. It’s only by managing all of those that you’ll be able to find success in your endeavors.

The three boys who may possibly be Alistair are also your eligible bachelors, and naturally, you’ll be getting closer to each of them as you investigate who Alistair may possibly be. It’s already hard forging bonds, knowing that any one of them may be a rampant dicknostril in disguise, but to make matters worse, all three of your potential suitors/future punching bags play Rivenwell Online but are somewhat cagey about it, for various reasons. However, as the game progresses, the search for Alistair takes more and more of a backseat, and your goal becomes more about growing close to these potential mates.

END_OF_DOCUMENT_TOKEN_TO_BE_REPLACED

Heading back to the Christine Love visual novel well a second time, I recently made my way through the tangled romances of high school in don’t take it personally babe, it just ain’t your story.  Yes, that’s exactly what it’s called.  Capitalization and all.  My spelling is prefect, don’t question me.  dtipb,ijays is a spiritual successor to Christine Love’s earlier work,  Digital: a Love Story, which we reviewed here.  Like Digital, it can be downloaded for free here.  As a spiritual successor, it hits a lot of the same themes as Digital.  It’s about love, and the way the internet is used, and inter-character relationships drive most of the plot.  However, the way diptb,jiysa delivers on those themes is radically different than its predecessor, and in my opinion, a lot stronger.

In this game, you play the role of John Rook, a twice-divorced 38 year old man who lands a teaching role at Lake City Academy, a private American High School that apparently has only seven students enrolled.  Well, saying you “play the role” of Mr. Rook is stretching it a bit.  pdibt,ayisj‘s storyline is a bit more flexible than Digital’s completely linear plot was, offering you the chance to push a variety of characters down a few different paths and having three different endings, but you’ve actually got very little input over Rook’s actions.  Whereas the main character of Digital did nothing without you pressing a button for it, John Rook is his own man.  Your only affect on the game is occasionally choosing which of two or three conversation options to take.  It’s not a bad thing.  If you go into a visual novel expecting to be able to bend the plot to your whim, you’re going to be more disappointed than I was when I was 5 and I learned my “Mickey Mouse’s Underwear” joke wasn’t funny.

Anyways: you=John Rook, teaching english literature at Lake City Academy.  You have seven students in your one class.  Maybe there’s more, but they’re never relevant to the plot so the game doesn’t bother to mention them.  However, as the title mentions, this just ain’t your story.  The story’s really about your students and the various juvenile romantic entanglements and personal problems high school always involves.  Rook’s role is to take the bishop pawn and help the black queen put the white queen into checkmate within three moves.  Oh wait.  What were we talking about again?  Right.  btipd,jsayi takes place in a world were high school students actually talk to their teachers.  Voluntarily even!  So your role is to help your students work out their personal issues with love and… well, mostly love.  Or, you could use your power to make sure everyone dies friendless and alone.  If you’re a dick.

But you don’t go into your matchmaking services without help.  Oh no!  The school, in order to curb bullying, has given teachers full access to its students social media profiles and private messages!  So you get every opportunity to spy on your students and learn that Jake is so dreamy but Rebecca’s already got dibs on him so I think I might try to move on his best fried Zack but oh he does that weird thing with his knuckles that’s soooooooooooo gross I don’t think I can go through with it.  Obviously, there’d be some pretty big issues if the students found out that their worthless gossip spread outside their circle, so you have to keep your ability to read every private issue a complete secret.