So, we’ve covered a lot of things here at Lost to the Aether. As it turns out, I’m a pretty multi-faceted individual. We’ve got the video games going on pretty much all day every day, sure, but we’ve also talked about drawing, writing, visual novels, cake, films, books, my good looks, and pretty much anything else that struck me as being wordworthy on that given day. Sometimes, I feel like doing something new. And right now’s one of those times. Specifically, I’m going to talk about a manga. But not just any manga. Well, to anyone else, it’d be just any manga, but it’s one that actually means something for me. Today, I’m going to be putting my thoughts down about a work that actually has some importance in my life, however much that may be. I want to talk about The Drops of God. 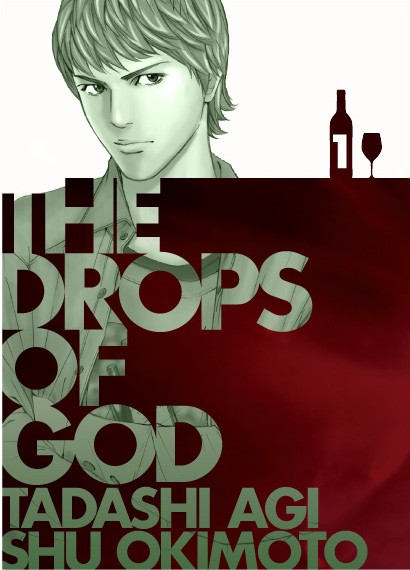 I’ve been saying for a while now that you can find a manga about anything. Just on my shelf, I’ve got manga about running a bakery, a used bookstore, a whole series about American football, maiding, and that’s just the pedestrian ones. The manga audience back in the form’s homeland is large enough that they can support material on pretty much every subject matter, from the most fantastic to the absolutely pedestrian, and you get a lot of good stories that way. So it is with Drops of God; it’s a manga series about an everyday subject you’d think would be really hard to get a good story out of. In this case, it’s all about wine.

I like a lot of things in life. I like video games, as should be obvious to anyone who’s been on this blog before. I like stories. I love my hair. Seriously, I’d marry my hair if the stupid establishment would just let me. And I also enjoy wine. That wasn’t always the case, though. Way back when I was a little cub Aether but still totally of drinking age (obey the law, kids) wine was just another drink to me. Something to get drunk off of, something that may have tasted good, but nothing much more than that. Eventually, because of the efforts of the rest of the family to give me some sort of traits they weren’t completely embarrassed about at parties, I started to appreciate it more. Wine is a really complex drink, and it’s that complexity that’s given rise to whole industries, and after having enough, I started seeing that complexity, and began respecting the depth in wine. I wanted to learn more about it. And there’s where my problems started.

The problem with learning more about wine is that you have to deal with the kind of people who like wine. And a lot of those people are great, don’t get me wrong. But there’s also a lot of people who are so strung up on wine being so super classy or the drink of the gods or treat it as if it’s somehow sacred, and when you’re just trying to get started on it those people can be really overwhelming. The world is full of people who insist that the one true way to enjoy wine is at a party trying to tell as many people as possible about mouthfeel, or closing your nostrils in sequence and smelling it one side at a time, or by loading it up into a syringe and injecting it straight into your eyebrow. Even the people who aren’t infected with all the bull honky that surrounds wine still tend to treat it as if it’s that one hot girl with all the money from high school, unapproachable without the right pedigree. Wine is an excellent drink with a lot to offer and a lot of layers, but man is its world inaccessible to someone trying to make the next step up from layman.

That’s where I was in life when the Drops of God started coming out in America. I was starting to view wine as something more than just a drunkmaker but was having difficulty getting any further than that, and was close to giving up on the drink altogether. Then here comes this silly little manga about this silly little substance. And you know what? It just worked for me. Something that, even though it treats wine as a super-serious matter as so many other people do, is still pretty humble and down-to-earth in it’s approach to the subject? Something that has enough substance to teach a bit about wine, but is actually entertaining? Drops of God was exactly what I needed to get me over the hump I had at the time. I really enjoy wine today, and I don’t think I’d be able to on the level I do if it wasn’t for this manga.