Athena over at AmbiGaming had posed the question recently. What’s a game you love but never talk about? I recently started replaying it again, so it was a pretty easy answer for me. Shin Megami Tensei. I’ve talked about other games in the series, some of them at length, but I don’t really talk about the Super Famicom original all that much. That got me thinking. Well, everything gets me thinking because my brain is just so big from knowing so much stuff, but that got me thinking specifically about this game. Maybe it’s time to correct that whole not talking about this game thing. Let’s talk about Shin Megami Tensei.

You might know the Megami Tensei series. The majority of the releases for the past decade and a half have seen western soils. Outside of the Persona series, they’re not really hitting mainstream attention, but they still draw plenty of their own groups to them. They series as a whole is known for a lot of things. Mixing a lot of recognizable figures from religion, mythology, and folklore, and letting you fight/ally yourself with them. Being really hard. Having God as the big bad guy. Or, back in the old days, being a classic JRPG series that never had a hope of being marketed to America through NOA’s content policies. 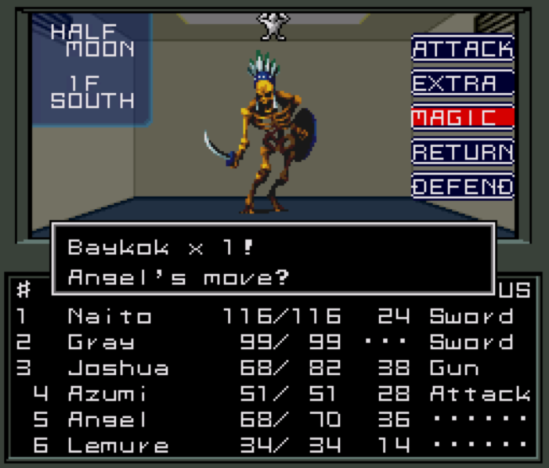 That last one is how I first came across the game. The Megami Tensei series is one of my favorite ones. It was Persona 4 that introduced me to a lot of it, showed me magic and convinced me to dive in deeper, but my introduction to the series actually came years earlier with this game. Back when I was a cub, I had a friend. I know, I know, stem your surprise. Anyways, friend’s older brother was big into import games. Had himself a modded SNES, which seemed super cool and elite until I grew up and learned that all that entailed was knocking out the little tabs in the cartridge holder so that the SFC cartridges fit in the American SNES. As I recall, he had himself a rather sizable collection of Japanese games as well. Friend and I had some good times alternatively watching him play and playing through a bunch of games, including this one, although outside of when he explained things to us, we really had no idea what was going on in game.

Fast forward a couple of years. My family had moved away. Our parents kept in touch, but he and I didn’t. After graduating college, I committed to spending a year as an Americorps volunteer in an economically blighted area in middle of nowhere America. Early on, my mother had sent me a care package. Well, apparently she’d been talking to her friends about it, because my old friend had sent her a couple things to include in there, including the old copy of Shin Megami Tensei. I ended up spending long, long hours with that game, trial and erroring my way through the Japanese text until I finally found a translation guide online and could play it fully. I spent a lot of time with that game. That proved to be a very transitional time in my life, wherein I lost a lot of the old and found a lot of the new, and a lot of my memories about all that have gotten tied up in my thoughts about Shin Megami Tensei.

Artistic works, whether visual arts, movies, books, games, whatever, often end up meaning something to us, moreso than the work itself. Shin Megami Tensei is one of those games to me.  It’s been a constant companion for me, a game I come back to every once in a while just to relive.  It was even the subject of the first LP I ever attempted, although a similar transitional time in my life interrupted that.  Maybe that’ll be one that finds new life here eventually.

END_OF_DOCUMENT_TOKEN_TO_BE_REPLACED

So you remember last time we did this whole retrospective thing, when we were writing essays on each game of the Saints Row series and then all of a sudden they decided to release the fourth game about the time we would have finished up?  Most people would probably just write that off as coincidence.  But if you’ve been reading my blog, you know that I am far from being most people.  After much consideration, I’ve been forced to come to the conclusion that I have magic powers.  If I write enough words about a series, it will put the arcane forces into motion and summon the next game into being.  It’s a heavy responsibility, but I’m going to use these powers for the good of everyone.  See, there’s one series that is truly among the best of its peers, yet hasn’t had a real sequel for half a decade.  I speak, of course, of Shin Megami Tensei: Persona.

You’ve probably heard of Japan.  If you haven’t, it’s that place where approximately 28% of weird on the internet comes from.  They’re very committed to their craft of making everything weird, and very little passes through their hands unscathed.  Give them pillows, they turn those into girlfriends.  Mention Mein Kampf to them, they’ll make it a manga.  Try to teach them about Jesus, they’ll turn him into a busty, scantily clad blonde woman who’s constantly the victim of sexual aggression. 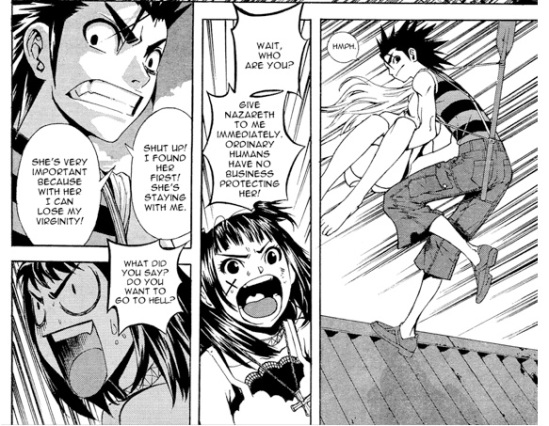 You thought I was joking.

So I guess we should be glad that when introduced to the basics of Jungian psychology, they just ended up making a series of JRPGs out of them.

The Megami Tensei series is one of the longest running JRPG series there is, with the first game actually coming out a couple of months before the original Final Fantasy.  The series is known for several things, including its high degree of complexity and challenge, its heavy use of mythology and religion, and its high degree of focus on spin-offs in comparison to other series.

And it’s the last of those points that brings us to the Shin Megami Tensei: Persona series.  One of Megaten’s first spinoffs, the series launched on the PS1 in 1996 and has been going strong since.  Probably intended as a more accessible gateway to the famously opaque main series, the Persona games certainly dial the challenge and complexity the series is famous for back quite a bit, ending up being merely really hard rather than Megaten’s standard controller-crunching difficulty.  In exchange, the Persona games are among the most character-driven and plot-focused of Megami Tensei’s offerings.  As the series go on, they only get better at this aspect, building up sprawling epics that absolutely will make you care about at least some of the characters on offer.

Both the gameplay and plots centers around the titular personas, the characteristics a person adopts to deal with others made manifest in the physical realm.  Every character in your party has formed their personas into some sort of god or mythical creature, and draws strength from them in addition to being able to summon them to deal with their enemies.  These personas are obtained through various means across the games, but they are the central pivot holding everything together.  Other bits of Jungian psychology, such as shadows and the collective unconscious, also get a fair bit of play throughout the series, but it is always the persona at front and center.

Battles are turn-based and often require quite a bit more thought than your standard JRPG.  Just hammering on the ‘fight’ button indiscriminately will get you nowhere.  Instead, you have to take advantage of the various strengths and weaknesses of yourself and your enemies to truly succeed.  The series has a heavy emphasis on dungeon crawling as well, with buildings twisting themselves into maze-like structures the likes of which would drive any engineer mad.  Resource management is also a central point of gameplay, moreso than most other JRPGs.

For the first three games, the Persona series is extremely experimental.  They’re constantly trying new things, including several that you’d be crazy to try to put into any serious game.  The experiments don’t always work out, but when they do, they work wonderfully.  In any case, playing these games gives you an experience that’s certainly unlike any other, and it’s honestly interesting to watch the series progress from being just a few alterations away from Shin Megami Tensei If… to being something so stridently different from any of the series’ other offerings.

The tone of the Persona games is a little more varied than the main series’ usual dour resolution.  In fact, this is one of the more optimistic series in Shin Megami Tensei canon, with your characters actively averting apocalypse rather than simply surviving and dealing with its aftermath.  That said, the series does take some really dark turns, moreso than many other JRPGs would dare.  Serious danger and death are always lurking in these games, but that does not mean there’s never any bits of levity.  In fact, some of the more memorable scenes from the series come from the characters just forgetting about the everpresent threats and just enjoying themselves for a while.

Just like last time around, we’ll be putting up a separate entry for each game.  These entries will contain a lot of words.  Hopefully, they’ll be good words, though.  We’ll be taking a look at every aspect of these games that my meager little brain can come up with.  And hopefully, I’ll develop a better understanding of them myself.  You can try to, reading over what I have to say about them.  Given the size of the series and the time it takes me to do these, it’ll likely take me a while to be complete, but I’m sure it’ll be a worthwhile journey.  Now, if you’ll excuse me, I’ve got some games to play.