Last time in Dirty Deeds Done Dark Souls, we pretty much became a killer for hire.  Oh sure, it may have been a wicked mercy, and it may have been for the fate of the world and all that best chosen one business, but the fact remains that I killed both two of the Izalith family members as well as the twisted, misshapen Witch of Izalith herself just because my lady of the flame asked me too.  It was a dirty deed, but one that needed to be done, but, I hope, one that bought them all some measure of long-deserved peace.

Also, I slew the well from which all my  wicked inferno magic is drawn!  I’m pretty awesome, aren’t I?

Eh.  Have to joke.  Have to try and keep the spirits up.  Humor’s most important in the darkest hour, right?  Truth is, I’m just about at the lowest point I’ve been in since I left the Undead Asylum.  Laurentius of Great Swamp went hollow and died by my hand long ago.  Solaire of Astora, I’m not sure whether he went truly hollow rather than just being driven generically mad, but either way, he lost his will, then lost his mind.  Siegmeyer of Catarina, well, I’m not entirely sure what happened.  He seemed depressed, over his lack of success, over the amount of times I bailed him out, whatever, but I don’t think he was ever expecting to survive his charge against those demons.  And even as far back as the beginning of my journey, that knight that opened the way to my escape from the Asylum in the first place, before again, going hollow and dying by my blade.

And all the while I roam this blasted land where anyone normal seems to have perished years ago, in this dying world, working on the vague promises of that stupid snake whose words coming out of his mouth is worth no more than the dung pies I’ve shoved in, and that bloated goddess, who for all her divinity has done absolutely nothing that a simple box couldn’t have.  I’m the Chosen One, I’m the one who’s supposed to link the fire, cure the undead plague, renew the world, and succeed a god, and yet I’m the only one who actually does anything towards that goal.  Frampt, the Lords, anyone else who ruled in this land?  They’ve all either vanished, twisted themselves into uselessness in ages past or are actively making Lordran worse, now.  And what does succeeding Gwyn even mean?  I am already immortal and monstrously powerful.  What more can becoming a god gain me?  In pursuit of that, I have killed so many people, some of whom deserve it, but what good has come out of it?  Whose lives are better for my actions?  Sure, some of those I killed played some part in how screwed up Lordran’s gotten, but I feel like even with their deaths, I’ve only just put a bandage on a mortal wound.   I’ve got promises that by fulfilling my station as the Chosen Undead, I can at least purge the undead curse and bring life, true life, back to this world, but most of that comes from sources I know aren’t telling me the whole story.

Yet even so, I know I’m going to stay the course.  I have to.  If I stop, I know I’m going hollow.  The knight at the Asylum lost his mission.  Solaire got discouraged.  Siegmeyer seemed to have given up.  And they are all no more.  That will not happen to me.  I need to keep moving forward.  And I have no other direction than the quest of the Chosen Undead.  And you know what?  I’m starting to find myself not caring about killing these people for their souls.  The holder of the Lord Souls have all needed a good killing thus far.  For all I know, Nito might be the same.  And even if he hasn’t gone full-blown malevolent, at the very least, he’s done nothing about Lordran falling so hard to the darksign.  I’m sure I can make much better use of his Lord Soul than he is.

Still, even the most epic of quests could do with a break now and again.  And I really need something to feel good about right now.  And honestly, I could do with someone to talk to.  My best friend just tried to kill me, I watched another friend die, and the pressure of being chosen are getting to me.  Even the strongest of warriors need a shoulder to lean on, and I am getting to that point.  I head first to Quelana.  I don’t expect much empathy from her, but I at least need to let her know the deed is done.

She, at least, is happy that her family’s been released from their twisted, chaotic forms.  Well, except for the Daughter of Chaos, the waifish, spidery, fire-keeper.  As dire as her situation is, she at least seems to have retained something of her self. 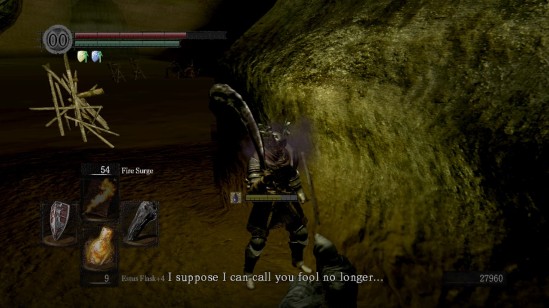 You know, that’s a big expression of endearment from her.

She teaches me the Fire Tempest pyromancy.  I’ll have to try that out sometime.  She calls out to me as I’m leaving. 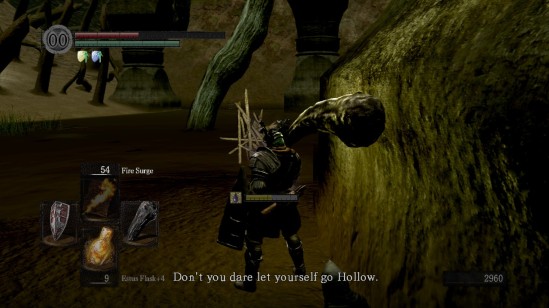 Well, I seem to have helped her out at least.  Now, I just need to keep this up for, oh, the rest of the still-living world?

While I’m in the area, I pick up the treasures left behind in the Demon Ruin’s magma, the ones that were by that pack of Taurus Demons.  There’s a bunch of souls on one, and a Chaos Ember on the other.  I take it to Andrei, who reports that he can’t do anything with it.  The Giant Blacksmith has no interest in it either.  And Rickert, as he proudly claims, doesn’t deal in embers.  I hold onto it for now.

It’s starting to occur to me that I could do with an upgrade in equipment.  I love this Black Knight Sword.  It has been my most constant companion in the Chosen One quest.  I would marry this sword if I could.  The nuptials… would be awkward.  But even so, I’ve upgraded it as much as I can, and I’m not going to be getting much stronger than I am now.  My damage output with this blade has peaked, and while still considerable, I’m worried it may not be enough for some of the future challenges facing me.  I’m not in a hurry to replace it, but I am going to be keeping my eye out for a new weapon.  Maybe I’ll learn to love it as much as I love this one.

In the meantime, my mind drifts to one other person who I’m pretty sure would do me good to talk to.  Someone who I’ve unequivocally saved.  Someone who’s not completely steeped in the despair that pervades those under the undead blight.  And perhaps most importantly, someone who hasn’t yet rejected my requests for a date.  Dusk of Oolacile.  The lady trapped for untold ages in the body of the golden golem, before I rescued her and she used her magic to return to the past.  She left me a summon sign, to speak with her again.  And if ever I needed it, it’s now.  I venture back to the lake at the Darkroot Basin.