We’re going to be posting a bit differently, here at Lost to the Aether, for at least the near future. Your main man was wounded recently, and while it’s not anything you should be worrying about, the effects of this do mean that I’m having a harder time focusing and putting the kind of thought I usually do into these posts. I should be able to make a full recovery with time, but until then, well, the content’s just going to be a little different around here, more in line with my presently diminished capacity. So, you know, fair warning. I hope you’re into it. I hope I’m into it, too.

Today I’m going to go back to an old standby and talk about myself. I’m good at that. Specifically, my little gaming quest. I’ve mentioned several times on this blog, once upon a time, I got the odd idea in my head that I was going to beat all of my games. All of them. I’ve been collecting games since I was a cub, I’ve got a lot of them. I give myself a bit of a break when the game is too glitchy to progress, or in the very, extremely, infinitesimally rare case I’m not skilled enough to beat a game, but overall, if I own it, I will beat it. I’m going through my entire collection, with games grouped by the console generation they released in, and by hook or by crook beating every single game I own.

This little quest has been an interesting one. Some games I never would have given the chance I did, some games I found that I enjoyed in a different way, and some games, playing them this way has actually given to my perspective of them. This quest has certainly changed the way I value games and the experiences contained therein.

But have I mentioned that I have a lot of games? Because I have a lot of games. The NES era took me a few weeks to play through. SNES took me several months. The N64/PS generation took me about a year to clean out. The PlayBoxCube era? I have been at this for years. Many years. Too many years. Longer than I’d care to admit. Children have been born into my family since I started, and have now grown old enough that I can have a sensible conversation with them. It’s been a long time. Part of which is that this was the generation I started making an income in, then one that I filled in later when I started picking up the other consoles for cheap, so my collection is perhaps the largest in this area. Part of it is that there are just so many JRPGs on these consoles bloody hell and they all take like 40 hours minimum to beat.

But for all the causes, I’m most of the way through. I estimate that I’ll be through the rest of this console generation and on to the next, hopefully not so long one, in about a year. That might be a bit optimistic of me, but still, pretty close. I’m excited.

I thought I’d take a look at all the rest of the games ahead of me. What do I have coming up, what shall soon be moving through the life of Aether, what more must I conquer before the next milestone. Because sometimes, it’s just fun to get organized.

Tales of the Abyss

So of all the games I haven’t beaten yet on this quest, this one is one of my favorites. The Tales series has, overall, been pretty solid ever since Tales of Symphonia, and Tales of the Abyss shows the developers in rare form. The Tales series has spent the past decade and a half really strong in terms of characterization, oddly charming technobabble, and in pointedly subverting common storytelling tropes, and Tales of the Abyss showcases some of the best the series has to offer. Mixing the typical JRPG wayfaring and dungeon diving with a fast-paced Smash Bros-esque combat engine keeps the experience feeling really varied and fresh. They don’t really add much new to the mechanics here over previous installments, and the new features they do add seem largely circumstantial, but the mechanics are very solid. I’m having a good time with it.

Also, I get to play as a left hander in this game. How often do I get to do that? 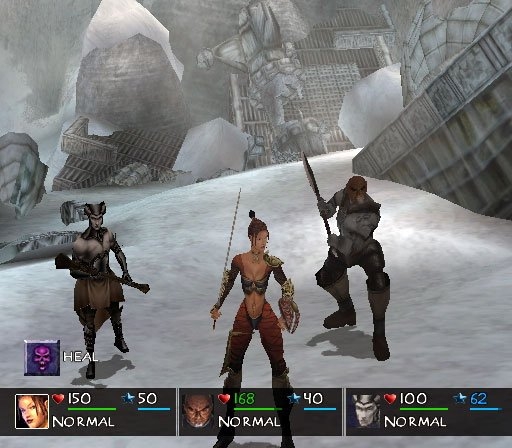 Which I suppose if this is the bottom of the barrel, the barrel’s not really that bad. Summoner: A Goddess Reborn is no Fur Fighters, or Turok: Evolution, or Fallout Tactics. It’s not the type of game that actively offends me for its existence. It’s just… kind of bad.

You remember when THQ made RPGs? Yeah, those were always kind of quirky titles, none of them actually very good. This is along those lines. I’m actually really interested in the lore and the world. It’s obvious the developers put a lot of time and thought into those. I just wish they put as much into their engine and presentation. Gameplay is as slow and clunky as my uncle’s pinto. When it goes bad, it gets about as explosively horrible, too. Graphics and sound are poor, and the art design is all over the place. It’s world is interesting, but it’d take a better game to keep me around if I wasn’t forcing myself to.

I’m a little worried that I may not actually be capable of taking this game the whole way through. Most of the time, strategy or skill makes at least a bit of a difference to how well combat goes, but when the game hits its bad points, that goes out the window and there’s not a whole lot to do except button-mash and hope it works out for you. I haven’t been completely stopped yet, but I’m worried that I’ll run into one of those bottle-necks where skill or preparation doesn’t matter and the odds are too stacked against me to make any headway, and that’ll be a really unsatisfying end to this run.