All right, so now that we’ve taken a look at the happenings in our last post, let’s go back and try to work out… you know, what actually happened.  Onikakushi drops a whole lot of questions.   No answers.  But if you know where to look, there might be a few hints.  So, what do you say we start with the biggest question?

How much is actually real?

At its core, Onikakushi is a story about Keiichi’s descent into paranoia.  You see him going from being a normal kid, run into a conspiracy so far beyond him that starts targeting him for even knowing about it, and in defense, Keiichi starts backing into the corner and pulling out the claws.  Starts smashing up nothing, thinking enemies are all around him.  But, maybe it goes beyond justifiable paranoia.  Maybe Keiichi starts experiencing things that are not actually there. 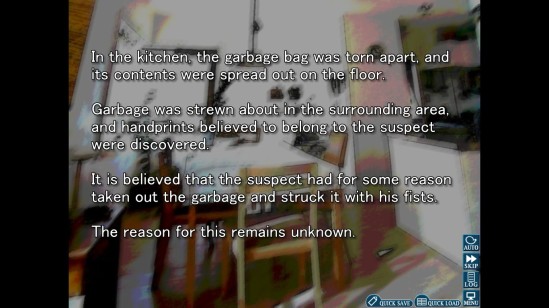 It’s interesting to me how much Keiichi does that seems to serve no other purpose than to make his house a portrait of madness at the end.  The entry way of his home is all smashed up.  Mashed garbage strewn all over the room.  A hastily scrawled note asking “Was there a needle?” on the fridge.  The brief, hand-written memoirs of a crazed child stuck with tape behind his clock.  The kind of home that would make you think its owner escaped from the asylum if you came across it in any crime drama.  Of course, all of these were in response to something Keiichi was reacting to, and you see all the context for that, but take a look at that from outside Keiichi’s head for a bit.  He smashes up his house by swinging at something invisible and intangible.  He has a relatively calm phone conversation with Ooishi, then mention of the needle causes him to take a break and throw garbage all over his house, before he returns to the calm-ish conversation.  Keiichi knows what it all looks like.  That’s why he’s so very careful about what he puts in his dead drop note, and why it ends up being way too vague to be useful, outside of the bits that get torn out before the police find it.

But how far back does Keiichi’s altered perception go?  Let’s start from the end, and take a look at some contradictions between what we’re shown and what we know.

So first, the police report at the end.  Right off the bat, it states, and states conclusively, that Keiichi had called Rena and Mion over to his house before he beat them to death.  Now, it doesn’t list any of the evidence for that claim, but logically, the police would be able to look into phone records in regards to what calls were made.  At least, I’m going to assume they could.  I don’t know ‘bout that 1983.  So we can figure that it’s more than just an assumption that Keiichi called them out.  Thing is, if you recall from the events we saw, when Keiichi woke up in his house before he killed his friends, Rena was already there.  Sure, she called Mion from Keiichi’s house, but there’d be no reason for Rena to be called over.  Unless, either the ‘Director’ she called share’s Rena’s number, or Keiichi had in fact called her over, and just wasn’t cognizant of it.

Keiichi died in exactly the same way as Tomitake did earlier.  That’s exactly what Mion was threatening, saying he’d be injected with the same drug.  But there’s two problems with this.  The first, going by what we saw, Keiichi was never injected with the drug.  He blacked out just before he did, came to with his friends dead, then recalled that he had knocked them away before he was injected.  Possibly, this is recreating memories after the fact, but otherwise, he should never have been impacted by the drug at all.  The second notable thing is that Keiichi started following in Tomitake’s footsteps long before the drug ever came up.  The big moment is when he smashed up his front entryway, striking at the presence he detected but couldn’t see.  Ooishi had notice that Tomitake had been found with a two-by-four that had impacted several things, but had no blood, skin, or biologic materials found on it.  He smashed up a guardrail, but had no sign of actually hitting anyone else with it.  Mayhaps he had been finding a presence that couldn’t be seen or touched, himself. END_OF_DOCUMENT_TOKEN_TO_BE_REPLACED