These are the longest-lasting enemy group in the game, who you’ll be romping with for almost all the game’s plot.  The Masked Circle is a doomsday cult, led by the Joker, who seek to gather enough ‘Ideal Energy’ to destroy the world and drive humanity into a new golden age in space.  Yeah, the rumors allow pretty much anything to happen.  Those who make their wish with the Joker find themselves first forced to be a part of the Masked Circle, then sacrificed for their goals, their Ideal Energy drained from them until they’re left motivation-less husks.  Their leadership is made up of pastiches of your own group, as Jun seeks to replace your childhood crew with his own creepy cult fellows.  They lose a lot of steam after you break Jun out of his Joker guise, leaving them pretty much without leadership, but they do maintain a presence up to the end of the game, being one of the few organizations able to make a stand against the Nazi invasion.  Of course, they don’t stand for long against them, and they’re only fighting them towards their own twisted goals, but still, at least you’re not the only group putting up the fight.  You’re constantly running roughshod over them, interfering with whatever they have planned, but most of the time you figure out the full extent of their plans just after they put them into action.  Your interference only seems to make them stronger, too, thanks to your spreading the word about them and the power of the rumors at play.  At least until you start knocking off their leadership.  Once you reach that point, there’s no recovering for them. 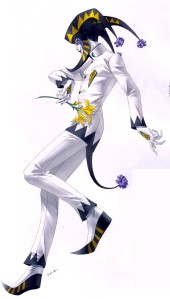 If you call your own cell phone number, the Joker will appear before you and grant you one wish.  At least that’s what everyone says.  Except that your crew tries it in the early game, and instead on sending you on a shopping trip to buy those larger pants you’re suddenly needing, he just sics a bunch of demons on you.  As stated previously, the Joker is Jun, still really, really pissed off at your crew thanks to the influence of Nyarlathotep and the false memories he has of all his childhood friends burning Maya to death.  To say his feelings towards you are troubles is an understatement.

Joker is the head of the Masked Circle, he who directs their activities towards the fun, fun goal of destroying the world.  Making you suffer seems to mostly be a side project of his.  The Joker is all about ideals.  He highly values his own ideals, he respects other’s commitments to their own ideals above all else, and he thinks largely in terms of ideals.  As twisted as it is, he honestly believes that the destruction of the world and the ascension of its people are honestly what humanity wants.  Thing is, he’s much more of a big picture guy, and doesn’t much care for the individual.  So, the fact that thousands of people don’t really want their ideal energy drained away in pursuit of the Earth’s destruction doesn’t much matter to him.  He is completely serious about the Masked Circle and their goals, focused on them above all else.  He doesn’t even use them to go after you until you start messing with the circle first.

Tatsuya Sudou’s dad is Japan’s Foreign Minister.  Tatsuya Sudou’s dad is a bad, bad man.  Growing up in that environment did him no favors, compounding the troubles he already had with his schizophrenia.  He found a father figure in Jun’s dad, however, who helped him make some sort of sense of the voices he was hearing, believing them to be some sort of alien prophecy and codifying them into the Oracle of Maya doomsday thing the Masked Circle is buying into.

Some time after that, Sudou snapped.  Depending on how far back the rumor thing was in effect, this may have been a result of other’s beliefs about him, conflating his schizophrenia and his father’s bad reputation and thinking he was a violent figure.  Either way, he became a serial arsonist, and burned down the shrine kid you and kid Maya were hanging out in.  You broke out, Sudou stabbed you, and you awakened your persona and burnt out his eye.  I’m going to say you got the better of that one.  After that, he stalked Maya for a good long while, then joined up with the Masked Circle for reasons that are mostly up to conjecture, and serves as King Leo, the second in command to the order.

Tatsuya Sudou, as should be obvious from the name unless you did the right thing and change your protagonist’s handle for something wicked sweet, is the counterpart for your lead.  Given Maya’s history with him, he serves to some degree as the Masked Circle replacement for her, too.  He’s an arsonist, so he likes blowing things up.  Throughout the section you’re dealing with him, he leaves behind clues that will lead you to buildings he’s rigged to blow.  You usually have two buildings at a time to choose from and have to pick the right one, enter it, and find the bombs in order to properly bring a halt to his deeds.  Or, if you’re of a lazy mind, you can choose the wrong one and skip a few dungeons entirely.  It culminates in a big encounter in an aviation museum where you have to rescue an entire field trip, beat him in a big slogknocking fight, and jet of there in an exploding blimp.  Probably one of the high points of the game, in all.  As you might guess, he gets a sadistic glee in death and violence, and actually burns a man alive by means of introducing himself.  His persona is Reverse Vulcanus. END_OF_DOCUMENT_TOKEN_TO_BE_REPLACED