You remember those parts in the original Castlevania, where you had Medusa Heads flying at you from all over the place, spawning endlessly, all of them seeking not to wear down your life bar but to knock you into an instant death pit for the cheapest, most frustrating failure?  Did you love it?  No?  That was your least favorite part of the game?  It really didn’t make you feel good?  Well, the makers of the NES Ninja Gaiden think you love that.  In fact, they’ve developed a whole game around that mechanic. 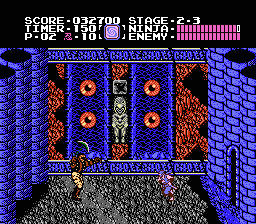 Ninja Gaiden hates your controllers, and it wants to make you break them all over your knee.  It was made by taking some absolute horseshit, distilling it into its most pure form, inscribing some coding onto it, and compressing it into an NES cartridge.  Ninja Gaiden despises you personally, and it wants to do everything in its power to make you feel like a worthless piece of scum.  This game thinks fair play is for the weak, and the weak are not worthy of stepping foot into these halls.  This game is hard, and not hard in the way something like Dark Souls is, where it’s actually intended for a human being to be able to beat it.

I beat it earlier this week.  And that feels glorious.

Ninja Gaiden is actually an excellent game, as long as you’re the type of player that enjoys staring down the most blatantly unfair obstacles and keeping at it until they blink.  Mechanically, it plays like a faster-paced classic Castlevania with a more maneuverable protagonist.  Enemies are constantly surging onto the screen, but anything short of a boss can be slain in a single hit, and those you can’t cut down, Ryu’s got the speed and the leaping ability to avoid.  You’re given a selection of sub-weapons that extend your attack range beyond just simple sword strikes.  It has a pretty heavy emphasis on platforming, all the while enemies are charging at you or launching projectiles.

And this game made some real achievements.  It was really advanced for its day, in a lot of ways.  For one, look at it.

Just look at it. 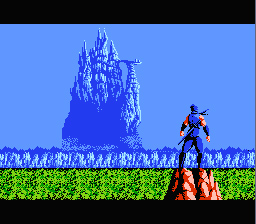 The game is gorgeous.  Way more detailed than you’d expect for most games on the NES.  They use the limited color palette very well, and it makes for some very striking visuals.

Ninja Gaiden is also notable for being one of the first games made to implement cutscenes.  This enabled it to tell a story well beyond what you’d normally find in a game of it’s day.  Granted, it’s not exactly recreating the works of Shakespeare here, but you actually get a decently complex plot out of it, with twists every act, betrayals, murders, surprises, deadenings and re-deadenings, and the super tough ninja Ryu turning out to actually be pretty dumb a lot.

Have I made the point that this game is good?  Because I want that in place before I get into all the ways it delivers its complete bullhonky to you.

I really enjoyed my time with Ninja Gaiden, but if you’re going to do the same, you’ll need to embrace that part of yourself that enjoys facing down things doing their utmost to ruin you and overcoming them.  Playing this game is like riding the bull, in that you’re finding yourself on top of something that’s focusing the totality of its being into throwing you off and running you through.  I said earlier Ryu can slay most any enemy in a single hit.  The game is designed around that.  Most of its enemies, it doesn’t even make them that hard to hit.  Instead, it seeks to overwhelm you with their sheer quantity, and have them come from multiple directions.  One guy in front of you isn’t so bad.  But when you’ve got one guy slowly making his way at you from one direction, another charging from behind, a third chucking axes at your from a distance, and a bird dive-bombing you, all at the same time, it gets a little more complicated.  And you’d better get used to that.

Because enemy spawning in this game is absolutely brutal.  Every enemy has its spawn point.  Cross a certain part of the stage, and bam!, they’re in your face.  And the enemies in this game are good at keeping the pressure on.  Might be that you need to back up a little to get the space to deal with them.  If you go even a pixel beyond their spawn point though, they’ll be right back as soon as you cross over it again.  Hell, if you kill them while standing on their spawn point, they will immediately pop back up and charge right back at you again.  When their spawn point is at the edge of a gap you need to leap over, that gets to be a problem.

For that matter, you know that comparison to Castlevania’s Medusa Heads here?  Yeah.  Nearly every gap has something on the other side prepped to knock you back into it.  If you play anything like I do, you’ll be losing far more to getting knocked back into a pit than you will to losing your health.  That is a frequent challenge.  Frankly, every time you see a gap, you have to wonder where the enemy is going to spawn while you’re mid jump to try and shove you back into the pit.

And sometimes it gets into straight “Screw You” territory.  One of the things that makes this game work is that it’s actually really generous with it’s check points.  Lose a life, and it only takes you back to the last stage transition you had.  Lose a life to a boss, and it’ll knock you back to the previous stage transition.  Lose all your lives, and you continue on from the start of the stage.  You’re not limited on how many continues you can have.  Each level has 3 or 4 stages, so that’ll usually have you in pretty good position to continue.  Until you get to the final boss gauntlet.  Three bosses in a row, all of which require you to learn their mechanics and patterns a lot more than any other in the game, and if you lose a single life to any of them, you’re knocked back a full three stages.  For no reason whatsoever.  This is especially ridiculous considering that as you’re playing your way back through them, there’s checkpoints inside of that span.  I swear, the endgame benefits so much from having savestates.

And you know what?  That’s all fun.  It’s fun.  I had a great time.  And I get to feel super proud and smug for having beat it.  The game tried to break me, but I am harder than it is.