I’ve mentioned before that I’m a pleaser. It’s just in my nature. So when you guys were a little bit split on what perk to go with last round in our Fallout Voting, well, I figured I may as well take the time to shine. There was a large minority who were interested in seeing us take the explorer perk, to add a little bit of spice to our runthrough here in the form of the OMG SPECIAL ENCOUNTERS!!!!1111oneone!

So we split the timeline a bit. One split, where Athena takes the tactically advantageous perk that we democratically agreed on and continues on with the rest of the game that we already totally beat so don’t even worry about that, and one where she takes the perk that garnered such interest for the flavor of it and leaves everything far behind in pursuit of adventure.

Let’s see how that second timeline goes, shall we?

So Athena picks the explorer perk. This increases her likelihood of running into a super cool special encounter that totally blows all your minds. Then, ignoring the Overseer still wanting us to check back in with him, we head right back out into the wastes.

SPECIAL ENCOUNTERS only come up in the desert area to the west of our available map. Because having lived in a desert for a good long while, I can personally tell you that if you’re looking for something strange and unusual and interesting… yeah, I can’t even finish that. Anyways, we’re going to the desert. Let’s chronicle our adventures.

First, we have a regular encounter. In which we come across giant mole rats, and shoot them.

Then, we have another regular encounter, in which we come across some regular rats. And also shoot them.

Third, we have one more regular encounter. In which we come across giant mole rats. Shooting them also occurs.

This has been a fruitful hunt so far.

Then we run into a horde of giant dudes and dudettes in power armor. They say they recognize Athena from when she visited their base, which we totally haven’t yet but whatever. They also warn her not to do something but I don’t even care, because this encounter is not suitably SPECIAL for my tastes. C’mon Explorer! You promised me things!

Next, we linger a little too close to where mumble mumble is lurking, and run into a crew of Super Mutants. Unlike the ones in the necropolis who just made Athena feel a bit icky with their misplaced attractions, this ones are immediately hostile. And are also endgame-level enemies. Whereas Athena is a midgame level hero. Athena immediately starts booking it towards the escape zone. Tycho and Dogmeat hang back to fight. The two of them, as well as an enemy Super Mutant that came too close, all end up blown to pieces by minigun volleys from a mutant at the edge of the battlefield. These guys don’t play around.

Athena manages to escape, though. But then she runs smack into a very similar group of Super Mutants as she’s trying to put some distance between her and the thing you don’t know about yet. Without Tycho and Dogmeat to serve as meatshields, she’s the only target on the battlefield. So, Fallout has potentially the most realistic miniguns in videogames. In that rather than being the relatively wimpy high rate weapons of other games, miniguns in Fallout fire like 40 rounds in a fraction of a second and have enough power to chew through a tank. 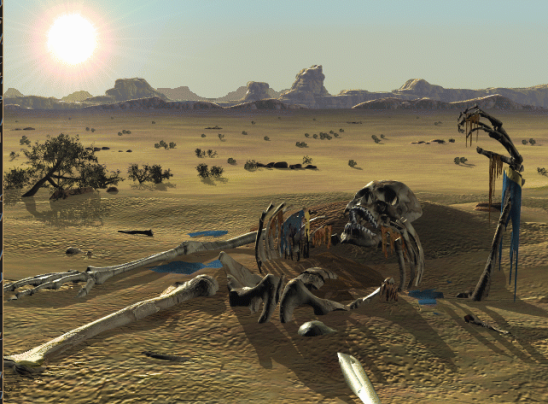 Suffice to say, Athena’s metal armor is not proof against it.

Let’s try that again, shall we say?  We have not come across anything suitably SPECIAL yet.

In this new alternative timeline, we’re careful not to wander too far north in the desert. Instead, for the first of several times, we run into an encounter in which we can’t find any water here in the desert, and take some damage due to our thirst. Except our metal armor provides us with some resistance against most sources of damage, so we don’t actually take any.

So, in review, we get so thirsty our health suffers, except all this metal we’re wearing makes it so that this doesn’t actually happen. This happens to Athena many, many times. So next time you’re wandering through the desert, make sure you’re wearing a hundred pounds of steel, and you’ll survive all the extremes it has to offer.

So Athena gets thirsty but not really about twenty more times, and then it turns out that she’s been wandering the desert for like an hour and nothing SPECIAL has been encountered. See, there’s three things impacting our ability to find special encounters. There’s that Explorer perk, which boosts our chances. There’s Athena’s luck score, which is above average. Then there’s the player’s personal luck score, which, as anyone who knows me will attest, mine is in the negative. I was lucky enough to get the world’s most amazing hair and natural good looks, so my luck is permanently as low as it can go to compensate for that early advantage. So, although Athena should have every shot of finding a special encounter, because of me, it’s just not happening. Sorry guys.

So, I don’t do this often, but after an hour of wandering the desert with nothing to show for it, I gave on. No Godzilla footprint, no TARDIS, no alien crash site, no used car lot, nothing. I don’t do this often at all, but here, I give up. My time is too valuable to me to spend more hunting for something this game is insisting it won’t give me.

Except that doesn’t even count, because this was all an alternate timeline. We’ll see you in our prime timeline next time around.

Next time: Back to reality.