Alternate Title: The one where Godzilla gets lasered in the dick. 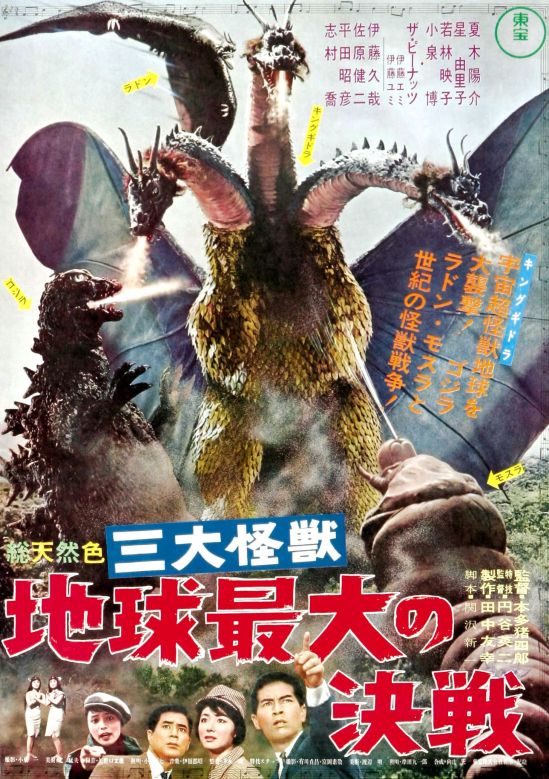 The Godzillaverse has a revolving cast of monsters in it, but there are a bunch that show up with consistency.  You get four of the main ones appearing all together for the first time this film, with the monster who’s widely considered Godzilla’s greatest rival getting the big introduction.  Heck, he’s even supplanted Godzilla in the title here!  So you know he’s got to be a big deal!

So with the introduction of King Ghidorah and with bringing Rodan in to the Godzilla canon, this movie establishes a couple of set pieces and the way things work that other films in the series will continue on with.  This is also the most pulp sci-fiish of the Godzilla films we’ve seen yet, also establishing a new trend for the series.

And, it’s also where the movie wades knee deep into the goofiness the old Godzilla films where known for.  Which, it’s been moving in this direction.  This isn’t out of nowhere.  King Kong vs. Godzilla had a lot of parody and cartoonish moments.  But this takes it a step further.  Some parts here are just downright slapstick.  And there’s no going back from that.  Kids were making up a big share of the movie market in Japan at this time, and apparently, they don’t go for big, deep, metaphorical critiques on the nature of war like adults do.  Go figure. 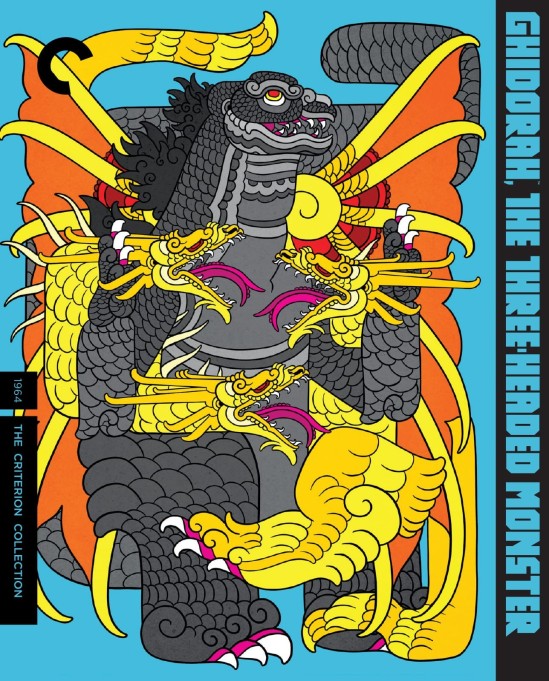 The film centers around a brother-sister duo.  Media Girl is part of the production team behind one of those History Channel shows about aliens and weird conspiracy theories that my own sister spends too much energy on.  Detective Bland is, well, a bland detective.  The princess of the Ruffle Kingdom is coming to Japan for some reason or other, and Detective Bland is assigned to be her security.  Also, it’s January, but there’s a freak heat wave going on so it’s like 80 degrees out.  This never actually matters, but hey, global warming is bad, okay?

Unfortunately for the Princess, her uncle wants her dead for political reasons.  These guys are the worst dressed.  Absolutely the worst.  Look at that picture up there.  Imagine a whole country of them.  So they put a bomb on her plane as it’s heading towards Japan.  Princess is watching a meteor shower from the plane, when she starts hearing a voice telling her to get out.  So she apparently bails from a plane in flight, just as it blows up.  Did she make it out in time?  Who knows?!  I do, because I watched the movie.

END_OF_DOCUMENT_TOKEN_TO_BE_REPLACED

Alternate Title: The start of the shared universe

So, you know how the Marvel Cinematic Universe is kind of a thing?  Notable in that all the stories impact each other, and the characters intersect much in the same way they do in comics?  Toho’s announced that, starting whenever they start making these movies in sequence again, they’re wanting to use a similar model for Godzilla films.  Which is a little strange to me.  Because they totally did that already.  40-some years before the Marvel films started having Agent Coulson hanging around.

So, there was a big gap in between the second and third Godzilla films.  Of like seven years or so.  But Toho wasn’t done with giant monsters in that meanwhile.  In fact, they made a whole bunch of kaiju films after Godzilla gave that genre a jump start.  And King Kong vs. Godzilla, being the most successful film in the Godzilla franchise, it made a buck or two.  And Mr. Toho, he thought to himself, “I sure like having dollars.  Maybe I should make another movie so I can get another dollar.”  But how do you follow up on a clash of two of cinema’s greatest titans, crossing over from disparate universes?  Well, you just do it again.  Except you go back into one of the worlds you already own, so you don’t have to pay those crazy huge King Kong licensing fees.  And wouldn’t you know it, you just had a really successful and well-received movie just a few years before.  Maybe you could cross that over with your marquee guy.

And that’s how we ended up with Mothra vs. Godzilla, a sequel to both 1961’s Mothra and 1962’s King Kong vs. Godzilla.  And in so doing, Tojo tied all their Kaiju films of the era together into one continuous universe.  You start seeing monsters cross over in each others films, Godzilla himself gets a few recurring enemies that started in other movies, and you’ll even get a few films centered not on individual monsters but the people living within them, such as Destroy All Monsters, which we’ll be getting to in a few of these posts.

This is also regarded as one of the best movies of the Showa era, thus proving this was a concept with some real mileage.  So no wonder they’d get some mileage out of it.

Note that this is not Godzilla vs. Mothra.  That is a very different movie.  Yes, the Godzilla franchise sucks at titles.  Kind of an easy way of remembering it is that this move was made when Godzilla was undisputedly the bad guy.  So Mothra, the heroine, gets top billing.  As opposed to Godzilla vs Mothra, which was made when Godzilla was only sometimes the bad guy, so you could still cheer for him.  So he gets top billing then.  See, simple.