Because using my snarking as an outlet produces content that works both for my social media here as well as the stuff I use my slave name for, here’s some more of those Facebook posts I’ve been putting out venting about the current Coronapocalypse.

As is standard, school is not in session during the post-apocalypse. This poses several problems, foremost of which is that it unleashes those Chaos Demons I had summoned into this world upon us, all the time. And while our bodies may be at risk from the mutants, the Infected, and the toilet paper hoarders from the outside, our very minds are at risk from the ever present threat of the Chaos Demons and their attacks on our sanity from the inside.

As is usual, I spend much of my weekends with the Chaos Demons alone. The smaller of them awoke at 5:30-ish in the morning, and rather than joining her elder sister in their traditional Saturday morning ritual of destroying my living room while I slept peacefully because who would be awake at that Godforsaken hour, she instead decided to spend the next half hour screaming at me for milk, then waiting long enough for me to lull back into the first stages of precious sleep before screaming again. When I finally relented and got her milk from the fridge, she took one sip before falling peacefully asleep.

I’ve changed my mind on what we’re eating first once we run out of food.

I managed to scavenge some fortune cookies. Given the current situation, the fortunes therein seem like the universe is truly mocking me. 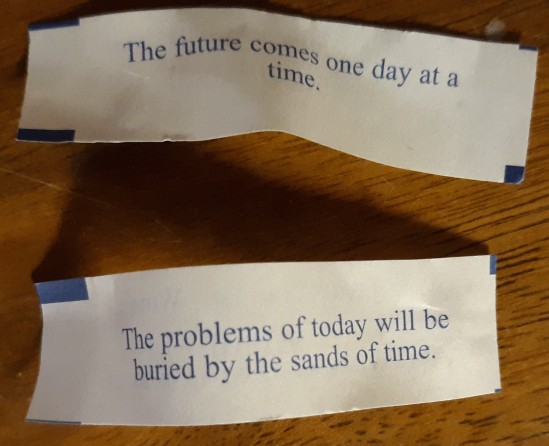 I ventured outside today. Not on a scavenging run, not seeking to make a preemptive strike in defense of the stronghold, just scouting out the landscape. At first, the thought of doing so without weapons gave me pause, but then I remembered that I had to get an open carry permit for my arms because our local government professionals declared that they were, and I quote, “total cannons”. The outside world is a surreal place. When the weather is warm, there are only children outside. No adults. When I go outside on a beautiful day, I only encounter those 18 and under, for whatever reason. The adults only seem to emerge in the snow or rain, when the children vanish. I assume that this is related to the mutations they’re all undoubtedly going through. Maybe its related to worms, only emerging into the open air when there’s precipitation because it enables them to breathe through their skin.. I’ll have to investigate this further. I did spot several adults out there in vehicles. I have been unable to ascertain their current state of physical form, whether mutant, Infected, or TP Hoarder.

My partner, for reasons unbeknownst to me, has doused the floor of my war room liberally with vinegar. I would like to assume that she’s doing so to purify any ghosts entering the stronghold, but we’re not at the point in the apocalypse that we’re at significant risk of that, and she did not concoct the vinegar solution with sufficient herbs to serve as a good purifying agent. I have to assume she would know better, but that leaves little reason that presents itself. I worry that isolation is beginning to have effects on her.

It has rained or snowed each of the past several days. With the way things have been growing, I’m just grateful that it’s not fire that’s falling from the sky.

We are out of port. Situation currently looks grim.

I fear I may have let my guard down today, with fatal consequences. Encouraged by my success at venturing outside yesterday, I went out for a run today. About halfway through my run, my body temperature started to rise, and some time afterwards, I felt rather short of breath. As I recall, those are both symptoms of the disease we’re all defending against. I fear my long tenure of successfully being a survivor is coming to an end, and soon, I shall join the ranks of the Infected. I will wait for confirmation before taking drastic action, but I remain prepared to cast myself out into the wastes at the slightest sign of this progressing.

I pray someone shall take care of my family once I am gone. Chaos demons and all.

Today, I’m a hero. Yesterday, my employer, our local government, had set aside some money to help people in this apocalypse with nowhere else to turn. Today, my employer imbued in me the power over the lives of the people applying for it, charging me to approve or deny their requests for assistance according to my merest whim. Well, and also a set of guidelines and standards, but mostly my merest whim.

Most were denied. This aid is only for people with truly nowhere else to turn. Most were eligible for some other program that could help them, which fair enough, they probably didn’t know about it, so I hooked them up. Some went straight for this last ditch hail mary pass by their county without exploring all the other options available to them, which, sorry, we’re not paying for the things you can just make go away elsewhere. Some applied for help even though they’ve already got the savings and income coming to meet their expenses. At least they were honest about it.

You know who did get help? The people who already had their budget worked out, and knew just what bills they had coming, what resources they had available, and exactly where their gaps were. Those who didn’t weaken themselves with children that made them eligible for other (better, but shhhh!) programs. Those who were already committing their resources to fill their needs to the greatest extent they could, and needed solely something to take care of the rest. That’s right. Those most successful at this were the Survivors. Just like me.

I worked hard at it. And as the fruit of 8 hours of labor between myself and others, we managed to complete most of the applications we had received in the first fifteen minutes that program was open. ……..this is going to be a long week, isn’t it?

My girlfriend has scavenged us up a bottle of port and Costco quantities of scotch, thus reminding me why I date her. It’s the little things in this apocalypse that touch you the most.

I’ve talked to probably around a hundred people the past two weeks, all of them either over the phone or on the other side of a webcam. Particularly with the cabal tightening their martial law and not allowing us out of the home but for certain, approved purposes, I barely even see anyone walking on the sidewalk outside, or come across them on my runs. The only people I talk to face to face are my partner and the Chaos Demons in my stronghold. I’m starting to get the strange sense, what if no one else is real? What if the apocalypse has been even worse than I feared, and the only ones left not mutated or, hopefully, Infected are those of us in my stronghold? What if everyone I’m talking to on the phone or chat is just a simulation put together by the cabal, to make us think that things are still mostly normal? How would I know?

An unrelated thought, although our organization-issued laptops come with webcams, almost none of my coworkers will turn them on for video chats. I suspect it’s to hide that fact that nobody changes out of their pajamas anymore.

I live in a world where the government has mandated that we are not allowed to go outside. Nearly everyone’s lives revolve around multifunctional pieces of advanced technology that both the government and giant megacorporations with loose morals use to spy on us, which is widely known but generally accepted. Contact with other humans is hazardous to your health. Everyone carries a general air of depression about them. I spend my evenings hooked up to a virtual reality machine just so I can feel what being outside and talking to another person face to face is like, because I haven’t done either in so long I have forgotten.

Am I a character in a dystopian cyberpunk story, or am I Aether in the modern age? Is there even a difference anymore?