Alternative Title: The One With the Alien Cockroaches

Godzilla vs. Gigan is… well, divisive is a good way to put it.  So, as a refresher, this is part of a string of Godzilla films that came after they intended to end the series, then decided “Nah, let’s make some cheap dumb things for children”.  Of the ones of those we’ve seen so far, All Monsters Attack was abysmal, whereas Godzilla vs. Hedorah was of the ‘so bad it’s good’ variety.  So, now we have Godzilla vs. Gigan lined up.  They’re bringing back Jun Fukuda, the guy who was behind the rather meh and definitely not Big G-feeling Ebirah, Horror of the Deep and my least favorite Godzilla film in Son of Godzilla.  Haruo Nakajima was having a hard time stepping into his long-time role as Godzilla after the death of series special effects director Eiji Tsuburaya, and this would prove to be his final time in the Godzilla suit.  And, to make matters worse, the Japanese film industry as a whole was really going through some rough times at this period, and the results show greatly here.  This film seems to have been made with a negative budget.  The actors are, even beyond the language barrier, obviously not of the highest paygrade, the sets are really sparse, stock footage is used in abundance, nearly all the soundtrack is pulled from other Toho films, and for the original footage, the returning monsters suits are all so beat up that they’re barely functional.  You can see scales peeling off of Godzilla in parts.

And yet, even with all that, you can tell they applied quite a bit of wisdom when working with their limits.  The stock footage is used far more wisely than it was in All Monsters Attack, and it doesn’t really stand out that much when shown in sequence with the original content.  And once the monster action starts, you can tell that all the skimping on sets and the extended amount of time you spent without your monster action was dedicated to make the monster action that was as big as it could be.  And hell, even the long time you spend on the human drama kind of things is pretty decent, if incredibly low-rent and cheesy.  This is a film that really rolled with the punches.

And it also introduced us to one of the Godzilla video games’ favorite monsters in the cyborg space-beast Gigan.  Take note of him.  This guy shall recur.  Even in the films’ continuity.

So, does all that serve to elevate the film above its severely weak productive foundation in the eyes of the Aether?  Let’s dig in to find out.

So, the film opens up with out lead character, Jimmy Slacks, lazy artist extraordinaire, putting in a pitch for a manga he’s been working on, except he didn’t bother to finish his sample or even draw in the big monster that’s supposed to be its central figure and… yeah, that gets him nowhere.  So he goes to have lunch with Lady Pain.  Lady Pain is awesome.  Jimmy Slacks basically does whatever she says because she’s a black belt and her ability to kick ass is without peer.  She’s off for most of the story here, but she shows up whenever anyone needs their face inverted.  The film’s not clear on their relationship, but he treats her and she acts more like his mother and he’s nowhere near cool enough to be the boyfriend of someone as stellar as she is, so that’s what I go with.  Anyways, there’s this children’s theme park that’s looking for a monster designer, and she hooks him up with an interview there.  Jimmy Slacks shows up at their office which is inside a giant Godzilla statue, discusses the lamest possible monster designs, and even he’s honestly surprised when he gets hired.  He hears a bit of the organization’s mission statement, which is to bring peace to the world by destroying monster island and everything on it.  Which is not something I would expect a children’s theme park to be going for.  A little bit of mission drift there, it seems.

Anyways, Jimmy Slacks designs some really bad monsters, then goes to show up at the office and bumps into some girl.  She drops a tape and runs off.  He picks up the tape, then the guy that just hired him and some guards show up.  They ask him where she went, and for completely no reason, he covers for her and points them in the wrong direction, then heads into the office.  Nobody else is there, so he starts nosing around until he accidentally opens a secret door and finds the boss of the place inside.  Jimmy Slacks is apparently stunned by the boss being a teenager, but he looks older than Jimmy Slacks, so that really didn’t come across very well.  Teen boss is working on some incredibly advanced mathematics, and when asked, says that he’s charting the position of M Space Hunter Nebula.  You might have picked up by now that these guys are incredibly suspicious.  Like, they’re not even trying to hide it.  Also, nothing about them hiring Jimmy Slacks makes sense.  Like, they never need monster designs for anything, and when we do learn their plans, none of them involve anything about a homework monster or overbearing mother monster or anything else they hired him to do, so I have no idea.  Whatever, lets move on.

On Jimmy Slacks’ way home, the girl from earlier stops him and tells him to hand over the tape.  Jimmy Slacks did one thing right at least, and saw this coming, having hid the tape somewhere before hand.  He refuses, they can’t find it on him, and some beatnik comes up and sticks an ear of corn in Jimmy Slacks’ back.  Jimmy Slacks faints.  So they take him to his house and give him some TLC for a while, then he wakes up and they chat.  Turns out the girl’s brother, Dr. Computer, has probably been kidnapped by the theme park, and she thought the tape might give some clue as to his whereabouts.  Jimmy Slacks could just write them off as crazies who held him up with corn, but on the other hand, that theme park is super shady, so he decides to check it out.

END_OF_DOCUMENT_TOKEN_TO_BE_REPLACED

Better Title: The one where Godzilla dances

By this point in the franchise history, Godzilla was getting to be pretty big in America.  His movies were pulled from Japan theater, edited badly, then dubbed badly, and the American audiences were like ‘yessssssssssss’.  So one American production company decided that maybe they should try and get in on the ground floor of all that.  So they rolled up to Toho, started getting involved in some monster movies, then when it came time for another showing of Big G to pop up, they were like “Yo, here’s a giant bag of cash.”  And the rest was history.

With United Productions of America bankrolling half the cost of this film, they were wanting to make sure it’d do well with their target audience, so this is a bit more Americanized than most of the other Godzilla films are.  Godzilla usually has a rather slow build, with a lot of mystery and people just kind of chilling before it’s finally revealed that all the weird stuff happening is really because of the monster whose name is in the title and also Godzilla is there too and they’re going to fight!  Instead, here, the action starts right away.  There’s a decent amount of human action and romance, there, and there’s even a western lead character for the first time in the series.  And, probably a bunch of other subtle changes, too.  I’m not really a film guy.  I can’t really say much about the cultural differences in media there.  Maybe Red Metal can, he’s the movie dude.

In any case, this is Godzilla with an extra dose of AMERICA! In there.  Let’s see how that goes.

END_OF_DOCUMENT_TOKEN_TO_BE_REPLACED

Alternate Title: The one where Godzilla gets lasered in the dick. 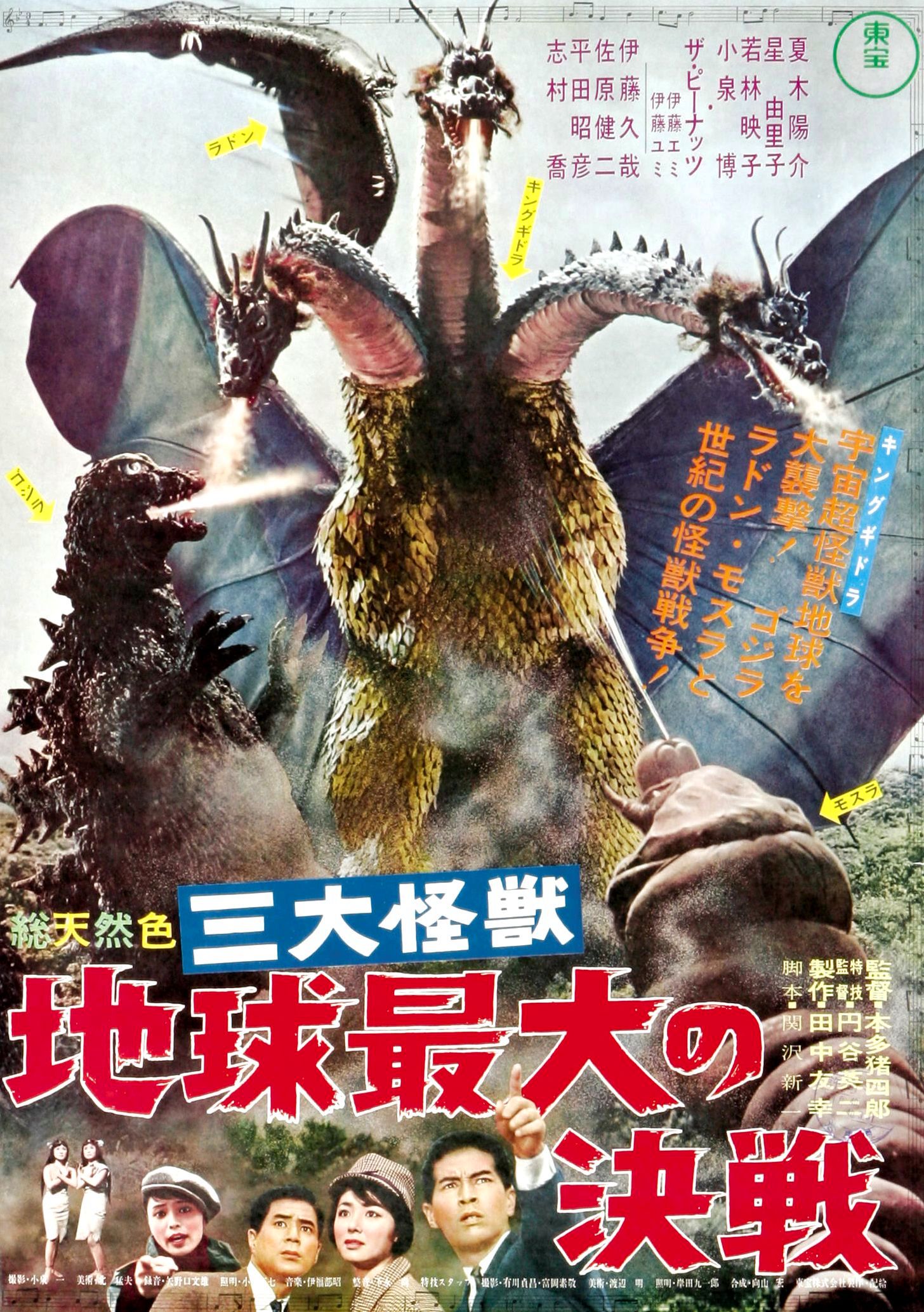 The Godzillaverse has a revolving cast of monsters in it, but there are a bunch that show up with consistency.  You get four of the main ones appearing all together for the first time this film, with the monster who’s widely considered Godzilla’s greatest rival getting the big introduction.  Heck, he’s even supplanted Godzilla in the title here!  So you know he’s got to be a big deal!

So with the introduction of King Ghidorah and with bringing Rodan in to the Godzilla canon, this movie establishes a couple of set pieces and the way things work that other films in the series will continue on with.  This is also the most pulp sci-fiish of the Godzilla films we’ve seen yet, also establishing a new trend for the series.

And, it’s also where the movie wades knee deep into the goofiness the old Godzilla films where known for.  Which, it’s been moving in this direction.  This isn’t out of nowhere.  King Kong vs. Godzilla had a lot of parody and cartoonish moments.  But this takes it a step further.  Some parts here are just downright slapstick.  And there’s no going back from that.  Kids were making up a big share of the movie market in Japan at this time, and apparently, they don’t go for big, deep, metaphorical critiques on the nature of war like adults do.  Go figure.

The film centers around a brother-sister duo.  Media Girl is part of the production team behind one of those History Channel shows about aliens and weird conspiracy theories that my own sister spends too much energy on.  Detective Bland is, well, a bland detective.  The princess of the Ruffle Kingdom is coming to Japan for some reason or other, and Detective Bland is assigned to be her security.  Also, it’s January, but there’s a freak heat wave going on so it’s like 80 degrees out.  This never actually matters, but hey, global warming is bad, okay?

Unfortunately for the Princess, her uncle wants her dead for political reasons.  These guys are the worst dressed.  Absolutely the worst.  Look at that picture up there.  Imagine a whole country of them.  So they put a bomb on her plane as it’s heading towards Japan.  Princess is watching a meteor shower from the plane, when she starts hearing a voice telling her to get out.  So she apparently bails from a plane in flight, just as it blows up.  Did she make it out in time?  Who knows?!  I do, because I watched the movie.