What do you say we finish up and get out of here as soon as possible?

Seriously, so many corpses, all over the place. This area’s depressing me. I just want to finish up as soon as possible. I head into this shack up the stairs.

I spot a darkwraith casually walking forward, into the other side of the shack. I don’t think he’s spotted me. I park myself to the side of the entry way, and wind up for a stronger attack, a powerful forward lunge. It does significantly more damage than my usual slash, but it takes a bit more time to prep for it. It’s not so useful in the midst of combat, but now, when I have the drop on the enemy? The perfect time.

Well, in other circumstances, it’d be the perfect time. I underestimated him. On two levels. My thrust is not quite enough to kill him in a single blow, but it leaves me way open as I pull my weapon back. Then, he busts out a combo I wouldn’t have guessed he’d have, slashing me for times in the second it takes me to recover from my own attack. Dude is fast. Naturally, that’s more than I can bear, and I fall before him.

So, waaaaay back to the beginning for me.

END_OF_DOCUMENT_TOKEN_TO_BE_REPLACED

Last time, in Don’t Die in Dark Souls, I died. I died hard, too. So hard that I didn’t even have time to grab a screenshot of it. It turns out that being able to cut through hundreds of opponents with less resistance than than a hurricane through tissue paper kind of got to my head, when really, it was only building up a pedestal so that I’d have farther to fall.

Now that I know the area, I try to rush back to where I fell. My supplies of these transient curses, that I need to put up a defense against these ghosts in the first place, are limited, so I want to make it there while still under the influence of the first one I consumed. That proves to be a humbling experience. These guys, that I was beating so effortlessly before? Yeah, that was only because I was cautious the first time around, taking them on a few at a time before any of them could make a move. Now that my confidence is bolstered, I do my best to rush through them.

Turns out they’re a little tougher when they can gang up on you. They still don’t do much damage, but they’re able to overwhelm me nonetheless. I don’t die, but I come closer than I’d like. When I regain my feet, I roll out of the middle of these guys, and dissipate them with a few quick strikes. This was a wake up call for me. I resume my careful pace moving forward.

I end up back in the elevated walkways just before where I died last time. There were a number of ghosts here, attacking through the ceiling and floor, last time I went through. I admired their tactics then. 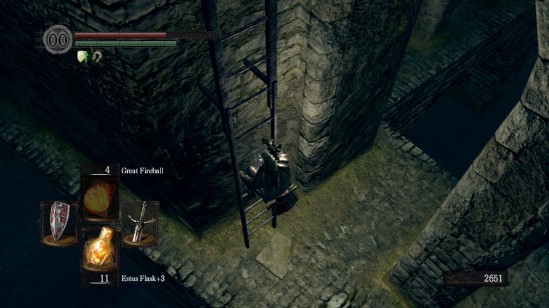 Well, I found a ladder now, that allows me to completely subvert them.

Case in point, here’s a lurking ghost, just waiting for me to walk overhead into his eager knives. Unfortunately, he’s paying attention to the above walkway, and doesn’t notice me down here. I teach him the error of his ways. I dispatch another ghost in a similar manner, then return to the upper walkway and continue my path forward, unmolested. 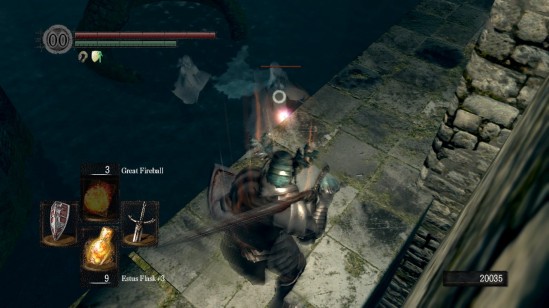 Here’s where I fell to my death last entry. Just like the previous time, two ghosts emerge from the water, one by one, as I approach. These ones are tricky, able to clip through the ground and come at me at a low angle that’s difficult to strike at. If I back off, to give myself more space, they retreat, hovering beyond the edge of this walkway. This is going to take a careful hand.

Last time, I misjudged the distance between the ghost and the ledge, and overextended myself, sending me hurtling off. I’m paying more attention now, but even so, I almost do the same here. I catch myself with one foot before I fall. I’ll have to be more careful.

The second ghost, I arrow him to death. Or undeath. Redeath. Whatever. He actually takes a few hits, enough to give him time to close the distance. He gets off one strike, but no more.