Some people say that you can never go home again. Last time on “Oh my God why is Aether showing us how much he sucks at Dark Souls?” we proved that those people are full of it by traveling back to our old haunt, the Northern Undead Asylum. Now, we’re never going to go back, because we’ve got almost no use for the place, but we totally could if we want to.

Instead, we go to our new home at Firelink Shrine! Land of mysticism, adventure, and total jerks but also Griggs and That One Guy! Speaking of Griggs, let’s see what he’s up to now!

Griggs is busy fanboying over his wayward instructor, Big Hat Logan. Logan was actually pretty happy turning undead, it seems, because that meant he could join the rest of the undead adventurers in prowling all over this land while not being quite as good a chosen one as I am. Griggs is convinced that Logan left him to go check out all the libraries in the land. Because of course books are much more important than the well-being of your proteges.

We knocked out one of our options last time, but we’ve still got our choice of new places to explore. There’s the forest outside of the Parish tower, and the Depths in the Lower Undead Burg. The plot is pushing me towards the Depths, because that’s one of the ways to Blighttown. I’ve played enough videogames to know that means all the best treasure is in the forest. Also, the Depths totally seems like an underground/sewer level, and it’s a matter of principle for me to put those off as long as possible. 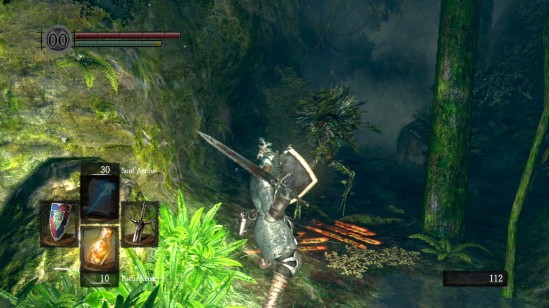 Of course, the forest is absolutely festooned with these Ents. They’re weak, but their attacks have some good range, and they’ve got a heavily damaging grab attack that can easily take of half my life. On top of that, they have a really high awareness range, so if there’s one anywhere near the area, you can be sure it’ll be coming soon. They’ll also hide for ambushes, appearing as simple bushes until you hit just the right place. Annoying foes, but luckily for me, I’m strong enough to slay them in a single strike. They drop mosses very frequently upon death, so they’re good sources if you’re looking to boost your supply of remedies.

The area’s divided into two parts: the Darkroot Garden, which makes up most of the forested area, and the Darkroot Basin, covering the nearby cliff and lake. The two cross over at several points, but we’ll but have their own unique features and enemies.