Why is it used so much?  It’s a really effective way of generating tension, and it’s relatively easy to direct that tension into whatever emotion the creator is trying to instill while you’re driving for that tension to be resolved.  If you know the character is about to get got but the character doesn’t, you’re going to feel it.  You’ll get that tension that then turns into anticipation, or fear, or worry, or what have you.  Or it works for positive emotions as well.  You may get excited waiting for a character to get a fun surprise that you know is coming to him or her.  Or hell, just think of how much comedy is based on misunderstandings.  Guess where that’s coming from.  Dramatic irony.  Awww yeah.

I’ve been playing Marvel’s Spider-Man lately.  And it’s been making me happier than any game has for a good long while.  But you don’t need me to talk about that.  There’s words about it all over the internet.  Hell, I picked it up after a very solid review from Red Metal, so you can head there if you want to find out why the game is great.

What I’m wanting to talk about today is Spider-Man’s use of dramatic irony, because it comes from a very unique source that I find rather interesting.  So, much like Batman, Spider-Man’s rogues gallery is one of the most notable parts of the IP.  Spider-Man is awesome, but he’d only go so far if he didn’t have awesome villains to oppose him.  And if you asked people on the street who the prototypical, the most notable Spider-Man villain was, you’d get one of three different answers: The Green Goblin, Doctor Octopus, and of course, the most legendary, trail-blazing, dominating villain in superhero comics history, the Kangaroo.  To all of our disappointments, the Kangaroo is not in this game, probably being saved up to be the central figure in the sequel.  However, Doc Ock and the Green Goblin are both in there.  Well, sort of.  And that’s where things get beautiful.

As Red Metal had reported in his review, the developers of Marvel’s Spider-Man were given carte blanche to play around with the canon as they saw fit.  And they used it.  So you get your marquee villians.  But not in the way you know them from pretty much every other Spider-Man thing out there.  To wit, you don’t get Doctor Octopus and the Green Goblin.  You get Otto Octavius and Norman Osborn.  The game is clear that Spider-Man is a well established hero with 8 years of activity behind him by the time the game starts, but unlike in… basically anything else Spider-Man, Doc Ock and Green Goblin weren’t a part of any of that.  Instead, you get their normie guises, just the humans that they are.  Brilliant humans, powerful humans, but humans none the less.  Not the supervillians you know them to be.

Do you get it?  Do you get what was just so fascinating to me?  You know things are going to go wrong there.  Origin stories are so common in superhero media, you know you’re stepping into one the moment you see either of these guys and they’re not already killing Gwen Stacy or marrying your aunt.  You know.  Spider-Man doesn’t.  That’s dramatic irony.  Thing is, the game itself gives you absolutely zero indication of this.  The game does not show you early on that they’re planning turns into supervillainy.  The only reason you know, the only reason that dramatic irony is there at all, is because of the rest of the IP.  You know they’ll be Doctor Octopus and the Green Goblin and make Spider-Man’s life hell, but only because this game is adapted from a very well known property but given these weird twists here.

And yeah, this is a minor thing, but this is something that’s really unique to this type of work, an adaptation of a very well-known property.  You want to make something from scratch, you couldn’t pull this off.  And I’ve never seen it before.  They play with it nicely, too.  You know you’re seeing the origin stories there.  Except, only kind of.  They play this straight, but they also subvert it.  They take your expectations, that, again, you only have because you already know Spider-Man, and they use it to lead you in the wrong direction.  Again, that’s something that only this kind of creation can do, and, as far as I know, only Marvel’s Spider-Man has done.  And the storytelling nerd in me really wants to celebrate that.

Man, it’s been a while.  My apologies for that.  I’ve been finding myself pretty over-committed to a whole bunch of things lately, and I just haven’t had the time for this blog.  Which hurts me to say.  In my line of work, you learn to recognize “I don’t have time for this” as being, whether the person realizes it or not, code for “this is not a priority for me”.  Which hurts.  I love this blog, I love getting my thoughts out for the small group of people who enjoy reading all this, and I love the whole sharing of ideas thing on this corner of the internet.  But unfortunately, there’s a bunch of higher priorities in my life right now that have been taking up most of the time that I’d been using to create content here.

Seriously, I’ve been prescribed video games by physical therapist as part of treating this weird medical thing I’ve been dealing with that’s thrown my life for a loop.  Specifically, I’m supposed to be spending some time with optokinetics, rebalance the whole visual-motion system.  However, optokinetic videos are boring as hell, so it’s been recommended I spend time with video games.  Not just any game though.  Need games where everything on the screen is constantly moving.  We want nothing to be visually stable.  Which is exactly what brought me to Duet.

Duet is one of those games that is all centered around an incredibly simple premise.  You control two balls fixed to opposite sides of a circle’s border.  You can rotate them around the circle, but you can’t otherwise change their position on the screen or relative to each other.  Blocks fall down from the top of the screen, and you have to rotate the balls to avoid them. 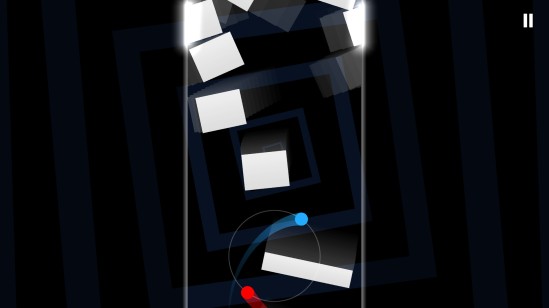 Okay, there’s a bit more to say than that.  The game’s pretty good, even with as simple a premise at that one, at really mixing up the challenges there.  It starts out really basic, to get you accustomed to it.  But then you get the blocks that rotate, and you have to match your rotation to theirs.  Or the blocks that switch sides as they’re coming down at you.  Or the blocks that change their pace as they’re coming down.  It’s actually a rather challenging experience.  It’s one that can drive you into a sort of zen mode, where you’re not so much thinking about what you’re doing, just purely reacting.  The game puts too much pressure on you to allow you to think too much, and thinking’s not typically that useful to you anyways.  Much like it is in life.  In any case, it quickly gets to be rather challenging, requiring snap decisions, perfect timing, and smooth movements to get through a given challenge successfully.  The purest form of what most would consider a skill-based game in all.

It’s really great at instilling a tactile sense into the game.  Fittingly enough given what I’ve been using it for, you can almost physically feel what’s going on.  It has a driving thumping soundtrack combined with a background that pulses along with it.  When you screw up, your ball hits a block with a solid pop, leaving a stain on it as the whole structure streams back upwards to start raining down on you again. It all injects a very real sense of energy into the proceedings, and really serves to elevate it above its base, simple concept.

And… that’s it.  For real, this time.  It’s an incredibly simple game at it’s core, so I can’t really wax on too long about it.  But hey, if you, like me, now need to play video games for your health, Duet could be a good, interesting way of getting you what you need.