The Witcher’s become kind of a big name in games.  One of the prime examples when you think of Western RPGs.  It’s a little weird, looking at the first game in the series, and realizing nobody expected that game to be successful.

It makes sense.  A game by a developer that had never done a project from the ground up before that goes deep into the lore of the obscure Polish novel series it’s based on that has never had any presence in the greater market?  Yeah.  That’s not going far.

Except it did!  The first Witcher game is a lot of fun!  And more than that, you can tell it’s made with a lot of love.  A lot of love by people who don’t know perfectly what they’re doing, sure, but that care for the material just oozes out.  The creators are obviously big Witcher nerds.  And more than anything else, they wanted to deliver the feeling of being the Witcher in the Witcher’s world to you.  And it makes for a good time doing so. 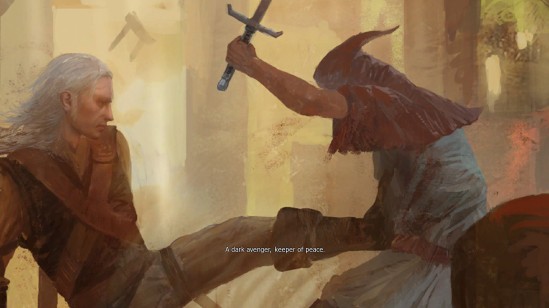 So, to get this going, in this game, you are Geralt, the titular Witcher.  The game takes place shortly after the final novel in the series, in which Geralt, total badass that he is, got killed like a chump by some random farmer with a pitchfork.  Makes things a little awkward that he’s up and walking around here.  It’s awkward for the people in-universe too.  Geralt did, explicitly die there.  Then he came back to life, sans his memory.  This is a plot point.

And there, you come in.  Yeah, typical “amnesiac hero so we have an excuse to explain all the stuff to the newbies” thing, but it feels more natural here than it does in a lot of other properties.  I think the amnesia was better implemented throughout.  You are Geralt.  As a Witcher, your job is to find monsters and witch them.  Usually, there’s people who will pay you to witch specific monsters.  Sometimes, you have to witch people too, in pursuit of your goals, but never for pay.  Also, you get to carry three swords.  At the same time! 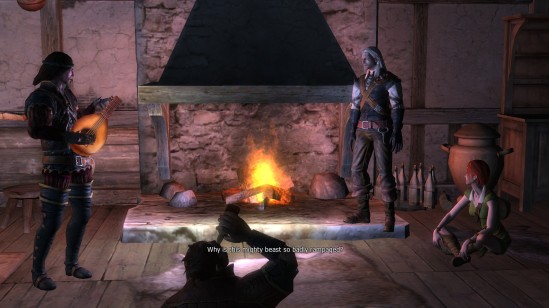 The game’s definitely a lot more plot- and setting- based than it is combat based.  Not that there’s not plenty of combat, it’s just not where the focus is.  It wants you to feel the world of the Witcher.  Which isn’t a happy place to be.  I don’t think it goes full out dark fantasy, but man-eating monsters are a very common occurrence there, people are horrible to each other, and everyone’s survived several different wars in their lifetimes just to get to this point.  The most common enemies you face are either creatures that feed on the dead or are the risen dead themselves.  You spend more time in the grungy underbelly of the host city than any place nice, and even the nice places aren’t that great.   It’s largely typical medieval fantasy, but it’s really interesting to see it from a different perspective, filled to the brim with classic Polish folklore and beasties.  The novels originally were pretty significant for taking the classic fairy tales and giving them dark twists.  They’ve moved well beyond that, and you don’t see those elements directly in this game, but that’ll give you an idea of the level this is on.  I feel like the big strengths of the Witcher’s setting as a whole lie in its subtleties.  It’s not a big super-unique fantasy setting, but it does have some twists on it that show how much thought went into these things.  And it’s kind of neat how much of that world building got carted into this game without being super explicit about it.  I played this game before I ever read any of the books, and it never felt like I was missing out, but now that I’ve read a couple, it interesting to see the little bits they imported without ever bringing real attention to it.  Like, in the novels, the only women that ever wear their hair down are royalty, prostitutes, or sorceresses, all women who are in control of their own occupations and lives.  The game never calls direct attention to it, but they still bring that feature right over.

The plot is… it’s interesting.  It has some depth to it, although it can be rather simple in points, but it does go in some interesting directions.  It only carries over a handful of characters and one major faction from the novels, but the style of tale it tells fits in with the original stories fairly well.  It is a bit stop and start, though.  Part of that is natural, coming from trying to carry an involved plotline in a somewhat sandbox world, while the rest is just from the plot and game structure not quite matching up.  The Act structure often brings things to a rather abrupt stop and shift, often when the transition is unexpected.  I lost out on both the best weapons in the game because the Act I was in ended without warning before I had all the sidequests I wanted to do done.  In any case, you’ll have long moments of moving slowly, before everything gets moving at a good clip once again.  I won’t call it persistent pacing problems, because it’s always at the player’s control, but you may not always elect to move through the lines as fast as you’d otherwise like.  In any case, it’s a decently ambitious plot, but the Witcher was obviously designed with gameplay progression in mind first, and story delivery second.  Still, it is multi-faceted enough to hold your interest when the plot does arise.  It plays really nicely with Geralt’s amnesia, in a way a lot of games ignore.  By that to mean, it actually addresses it more than twice.  Geralt has explicitly lost things in losing his memory, both becoming more gullible as he doesn’t have his experiences to draw back on, as well as losing track of who he is and his place in the world.  He has multiple conversations with old friends trying to figure out the role of witchers in this world that might be moving past them, and there’s some times where he has to recreate his personality and choose who he wants to be going forward.

Outside of wandering around and talking your way through situations, most of the gameplay comes through combat.  The combat engine here is really interesting to me.  It’s similar to the Dragon Age games, where all the action you’re seeing on screen are really just visual representations of a bunch of dice rolls going on behind the scenes, and a visual representation that doesn’t always match what’s actually going on.  You’ll see Geralt making some total acrobatic moves on his enemies, completely stun-locking them so they can’t even move, and his HP will still be chipping down bit by bit.

So yeah, the combat engine is interesting, here.  There’s not a lot of performance-based stuff you can do.  Essentially, once you’re in combat, there’s not a lot of choices you can make, and your skills won’t make much of a difference.  You get up to a five-hit combo with proper timing, but the timing is very easy to pull off, to the point that when you’re far enough into the game that enemies start presenting a challenge, you can get the full combo almost by rote.  You can switch styles at a whim, but in almost every situation, there’s a clear ‘best’ style to use, so you don’t get much utility out of that.  You do have some status-inducing bombs you can use to really change the tide of battle and a few spells you can mix up in combat, but other than that and your choices of target prioritization, all the other things you ‘could’ do to affect the outcome of battle take too long to have a meaningful effect. The core of the combat gameplay is going to play out as it plays out once you start the fight, and there’s not a whole lot you can do about it.

That’s because the big meat of the combat engine is in preparation.  You may not be able to do much to change the result of a combat encounter after you start the fight, but you’ve got a huge amount of things you can do before it.  From the start, you carry at least two swords, one steel for humans and one silver for monsters (both are for monsters), each of which can be forged and reforged with a variety of buffs and effects.  Each of those swords has three styles, one for heavily armored enemies, one for evasive enemies, and one for groups, that get different moves and effects depending on the choices you make as you level up.  And then you get a huge array of potions and blade oils to add additional temporary effects to you and your weapons.  You can’t just take an unlimited amount of potions, those things are somewhat toxic, and as you take more than a handful Geralt starts feeling the sting from them, so figuring out the most effective combination of the limited amount of potions you can take is vital for success.  The game is really big on having you do the in-universe research on the monsters and situations you’ll encounter and figuring out what you’ll need to counter them.  You have to find books.  Knowing about the monsters clues you into what they’re weak to, what swords and styles are best for them, and gives you extra ingredients for making your concoctions.  Books also contain the recipes for your potions, blade oils, and bombs which prove so vital, and enable you to gather alchemical ingredients in the wild.  The in-combat gameplay is very simple, but the mental work before it is anything but, which lends to a really interesting take on the typical RPG sword and claw business.

Overall, the Witcher does show a lot of signs of being a freshman game.  Designed pursuing the ideal over execution, the untempered ambition of the piece, and a fair bit of jankiness that experience probably ironed out of the later ones.  For all it’s flaws, it’s a really good game.  It delivers a unique experience, and it’s totally accessible yet becomes even deeper on repeat playthroughs and after having read the books.  It’s grown a little dated, but the game was solid enough to launch a very well regarded franchise and position its company well enough to put together the closest thing Steam has to a competitor.  I enjoyed my time with it, and I look forward to jumping into future games in the series.

4 responses to “Eyes on The Witcher”