This is an award winning blog.  You know that.  And I suppose it’s purely natural.  I am the type of person that awards just seem to gravitate to.  And it’s happened again, recently.  Courtesy of Red Metal passing on his Sunshine Blogger Award to what seems like half the internet.  Including our not-so-humble private space on the internet right here.  Have we won the Sunshine Blogger Award before?  I don’t even remember.

You probably know the drill by now.  I’m not one to pass up curiousity, and Red Metal’s leveraged some questions at us.  Let’s run through them!

In which cases would you deem the manga superior to the anime on which it’s based?

Having a story that actually finishes would be a big point in its favor.  A lot of anime, even good anime, even long running anime, has a tendency to end before it actually finishes the story.  I remember spending a lot of time with Tenjho Tenge, Eyeshield 21, Tokyo Ghoul, Inuyasha, etc, only for the anime to end long before the climax point they’ve all been building towards has been reached.  And I hate that.  I hate getting involved in a story, committing to a story, that just stops before it reaches its conclusion.  That’s the worst feeling for me.

Otherwise, it’s mostly an issue of pacing.  Which one delivers its energy and momentum better, and tells the story between major beats more effectively?  Sometimes it’s the anime.  The Naruto manga had a horrible sense of pacing, but the anime smoothed it out considerably.  Sometimes its the manga, when the anime creators weren’t able to properly transfer that over.

Which game do you feel has the best soundtrack?

I’ve never even played Killer Instinct 2013, yet I still find myself digging the soundtrack like crazy.  At least the first season.  Mick Gordon made some absolutely beautiful music for that game that draws from a lot of very interesting cultural sources that still really fit for it.  I have to really admire it.  Later seasons of the game brought on Atlas and Celldweller instead of Mick, which… just didn’t grab me.  Which is odd, because I’ve loved Celldweller’s other music, and his style seems a perfect fit for Killer Instinct, but it just didn’t seem to synchronize.  But yeah, first season Killer Instinct 2013 is absolutely marvelous.  Check it out.

Otherwise Xenoblade Chronicles is probably the soundtrack I’ve gone back to more than anything else.  Some of the most honestly beautiful music I’ve heard in a game, on there.  And it’s incorporated beautifully into the game, matches the settings and events perfectly.

And for a bonus, the soundtrack to Bastion is pretty marvelous as well.

If you could revive a dead video games series, which one would you choose?

Saints Row.  Which is an odd one.  Developer would insist it’s not dead.  After all, Agents of Mayhem follows up on the ending of the final Saints Row game and uses a lot of the same characters, and they’re totally working on another Saints Row project otherwise!  Wikipedia says so!  But we haven’t seen a game in the series that wasn’t, in essence, just a stretched out piece of DLC since 2011, and the current franchise owners seem to mostly be sitting on it.

I’m not even sure what version of the series I’d want to see back.  The original Saints Row was a fun game with a lot of frustrating gameplay hooks and an irreverent but straight-laced plot with some surprisingly intelligent writing hidden beneath the surface.  The second was a pitch black comedy with a plot that went to some rather gritty places, but once again, had some surprisingly smart story beats if you dug into things.  Saints Row 3 dropped a lot of the hidden intelligence, took the idea that ‘haha, crazy funny game series’ up to eleven, and basically made an evil Saturday morning cartoon.  Saints Row IV and Gat Out of Hell took that change and went crazy with it.

So yeah, like I said, I don’t know what I would want from the series, but I want something.  I loved Saints Row 2.  Saints Row 3 dropped a lot of the things I loved about Saints Row 2 and replaced them with something else, but it was still a crazy fun game.  Following up on either of those would make me happy.

What game/film/album/book did you have a particularly difficult time adding to your collection? 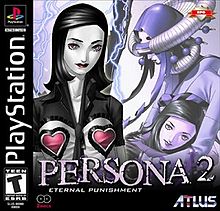 Persona 2: Eternal Punishment.  I’ve said it before, but my favorite game is Persona 4.  I fell in love with that game immediately upon playing it, and wanted to bury myself in the series leading up to it.  Thing is, before Persona 3 made it popular, the Persona series was a very niche JRPG series on the PS2 with a limited run, and it was hard to get copies of the game years after for a reasonable price.  Especially given that they weren’t available on the Playstation store at the time.  I was able to track down the original Persona easily enough, although I still had to pay more than I wanted to for it, but Persona 2: Eternal Punishment for a reasonable price was difficult to find.  Especially given that I wasn’t willing to pay more than original MSRP for a used copy, and I wanted one that came with its original case.  It took me a couple of months, and I ended up doing some minor negotiations with an Amazon seller to get a deal I was satisfied with, but I ended up picking it up for $50.

Of course, now it’s just like $10 digitally on the PSN store.  Progress is a wonderful thing.

Do you prefer to see a film at home or in the theaters?

At home.  Theaters are mostly a date thing for me.  I don’t usually just watch a movie or show on it’s own, I’ve usually got something else going on if I’m just going to sit down and watch something, so being at home lets me multitask.

In what cases did you find yourself siding with critics over fans about a work’s quality?

In general, when you’re dealing with an entry in a games franchise that throws in some deep changes to the established structure, critics seem to weather it better than the fans do.  And I would say I handle it more like the former camp, even for franchises I love.  I understand where it comes from, the new work isn’t meeting up to established expectations, but I feel my enjoyment of the game comes more from its own value rather than the expectations built up, so in general, I don’t get the ‘It’s different it sucks!’ feeling a lot of the fans seem to.

Silent Hill 4’s an example.  Critics thought it was ok, the fans hated it.  I was more in the former camp.  I felt it was a complete mediocre game, but one that wasn’t necessarily poorer than average for the time.  But it was missing a lot of the things that went so successfully in earlier Silent Hills, and for that, the game got blasted online.  Those didn’t really resonate with me.

In what cases did you find yourself siding with fans over critics about a work’s quality?

A lot more often than the above, really.  To be honest, I find the fan reception to be a bit of a better indicator of the chances I’ll have of enjoying a work than the critical reception, for a lot different reasons.  If a fan is excited for the game, and I resonate with the things that make them so excited about it when they describe or show it to me, that’s probably the thing that makes me most likely to get into the series.  Hell, I haven’t cared about Devil May Cry since I tried out the first game and found it too clunky for my tastes, but after watching an LP series by people who absolutely love the games, I’ve been convinced to give a second go to later games in the series lately.

That works the opposite way, too.  I’ve been finding critics to be a little too impressed with polish over substance, and too hesitant to give outright negative reviews to games that come from large-scale publishers.  Dragon Age II is an example of that.  Outside of the setting, I find the game absolutely horrid.  Combat is unengaging, enemy spawning is blatantly stupid, and you have to go through the same levels so many freaking times that it makes me wonder why I’m even bothering putting time into it if I’m just going to have to circle back and do the same things later.  The plot hits some interesting beats, but it continually undermines its own themes, and ends up feeling like a lot of what you did doesn’t really mean anything shortly after you did it.  I hate that game.  The fans hate that game.  Metacritic ranking?  Well, just see above.

What is the most difficult game you’ve completed?

Does DLC count?  I don’t think Dark Souls is the hardest game I’ve beaten, but I think the Artorias of the Abyss DLC might be the hardest gaming experience I’ve had.  Manus absolutely took me to the wall and back, and before him, I had to enter some sort of weird zen state and tap into my pure gaming instincts just to get past Artorias.

Otherwise, Zelda 2 comes to mind, but I had copious amounts of save-state help on that one.  And I’ve beaten Binding of Isaac, which adds harder levels and harder bosses on top of the previously ultimate challenges each time you beat it, but I haven’t exhausted its challenges as yet.

Which game series have you been following for the longest amount of time?

The original Super Mario Bros. Was one of the first games I owned.  And I’m still digging it.  So that one.

In what ways do you feel video game critics to be ahead of their film-loving counterparts?

You’re asking the wrong cowboy here.  I have an odd relationship with film.  Got burnt out on it a while back, after some stressful experiences working on the borders of the film industry.  Since then, I’ve had a hard time looking at films purely for enjoyment, and as such, don’t pay much attention to it now.  So I guess that’s the way game critics are ahead, I might actually read a review from them every once in a while.

How does hype factor into how you ultimately feel about a work?

If other people are excited for something, and the features that they’re excited about are things that seem interesting to me, that can be infectious.  See the Devil May Cry example above.  I love a lot of character action games, but I didn’t enjoy the first Devil May Cry, so I never gave the series another thought.  Until recently, in prep for DMC 5, the Let’s Play group I followed played through the series, which is one of their favorites, and I find myself wanting to get into the newer games and get that same excitement for myself.

Hype can ruin a work too, though.  Like, for example, with Planescape: Torment.  With the dialogue surrounding that game, I was expecting it to be transcendent, that it would completely blow my mind.  It didn’t.  It did one thing very, very well, but that was surrounded by a lot of flaws and a gameplay engine I abhorred.  I don’t know that I necessarily would have enjoyed the game more were it not for the hype, but I do recall having a very distinct moment of disappointment early on that soured me for a lot of the rest of it.