So last time… actually, you know what? You remember last time. I know you do. Let’s not worry about the usual intro here.

What? Ok, there’s that guy, over there. He doesn’t remember what happened last time. Do you believe it? What a jerk. But yeah, I guess we need to include him to. So here’s for that guy. Last time on Athena and the Lost Souls, our master thief had finally discovered her most solid lead as to the location of the water chip yet. The Water Merchants in the Hub suspected that the folks of nearby The Necropolis, which is sure to be a friendly and happy place, had their own source of water and most probably would have a water chip of some kind around. In pursuit of salvation for her people, Athena treks all day across the waste until she crosses some ruined signs from an ancient age claiming she’s entering Bakersfield, California.

It’s a little worse for wear. But she’s here. The Necropolis.

Immediately on entering town, Athena notes that there’s no life to be seen and the stench of death pervades the air. Just like the modern Bakersfield, California that we all know, am I right? (Seriously, am I right in saying that? I’ve never been to Bakersfield.) She does spot a group of locals in the distance, and approaches them.

There’s something a little off there. They’re not very talkative. But they are very ugly. And punchy.

Not that they do anything, though. The ghoul beats its fists limply against Athena’s metal armor.

Athena’s gun does slightly more damage than that. Blows it away in a single shot. In fact, Athena and Tycho mop up that whole group before Dogmeat even gets close enough to attach. No problem.

There’s another group of these feral ghouls a bit further up north. They’re stronger. Not strong enough to pose a problem, but strong enough that it takes more than one hit to bring them down. So, you know, Athena has to spend a bit more ammo dealing with them. That’s about it.

Then we run into a problem. See, the place we entered town? Completely surrounded by debris. Athena tries going to the north. Can’t get anywhere. She tries going to the west. Nothing doing. East and south only lead out of town. In fact, the only options available to her are to leave and… no. 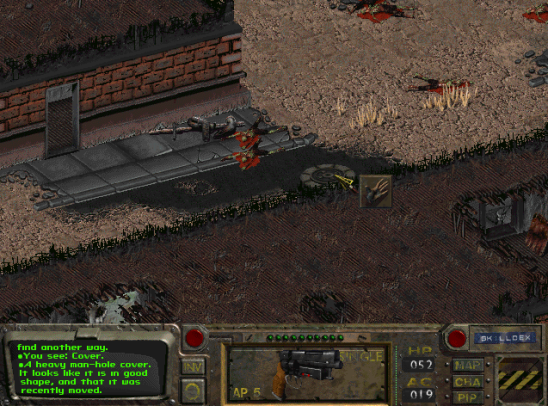 Athena finds a manhole cover, leading into the sewers, that looks like it was used recently and begins to wonder if saving the lives of everyone she’s ever known or loved is really all that worth it. I mean, sure, on the one hand, that’s thousands of lives lost in a horrible tragedy if she doesn’t secure that water chip. On the other hand, there’s poop down there.

In the end, her people’s salvation wins out, and Athena heads down the pipe. But she’s not happy about it.

I suppose it helps that new filth hasn’t been added since the bombs fell, but still. Ew. Athena heads through as quickly as she can.

Crossing under the rubble, into a new section in the city, Athena encounters yet another ghoul. The ones closer to the city center aren’t feral though, and still have their wits about them. This one begs Athena not to shoot. She holsters her weapon and talks to him.

A little bit of his story. He and his friends are a group of pacifist ghouls, or at least ghouls less violent than the leader of the above ground sane group, Set, would like. So they live in the sewers. Set doesn’t like having them there, but mutants have set up shop in town, and if Set wants to overthrow them, he needs all the help he can get. So he lets them live. Even gives them some of the water he controls. Once again, I hate sewers. But I’ve met Set myself. Set is a dick. And I have to say, between living with Set and living with filth, well, it’s a tough choice.

They talk about Athena’s quest for a water chip. Turns out, they do have a water processing plant here that uses a water chip! Success! Get the champagne ready, we’re going home! This guy poses a bit of a problem, though. That’s where the ghouls get their water. If Athena takes the chip, they’ll be in the same predicament as Vault 13. But it doesn’t have to be this way. They used to have two sources of water. In fact, the computerized water filtration system was just the backup. They used to get their water from a well, but the pump broke down. If someone could fix the pump, they’d be able to get their water just fine, Athena could take the part Vault 13 needs to survive without condemning an entire town to death, everyone’s happy. In fact, the parts needed to fix the pump are in the sewers somewhere. The peaceful ghoul has sent some of his group after it, but none of them have been able to face the rats and return alive. I suppose that’s what happens when your peaceful. Rodents kick your but until some cool person in spiky metal armor comes along and saves your day for you. 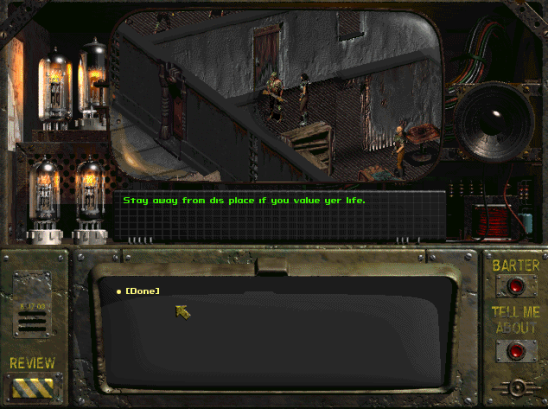 First though, this sewer sucks. We head above ground. There’s a ghoul toting a shotgun here. He’s a sane one, not like the ferals on the outskirts. Tells us to go away or he’ll kill us. He proceeds to do exactly nothing as Athena ignores him and heads deeper into the city.

We head to a large church in the center of town. Out front, there’s a ghoul who tells us there’s no way we’re getting inside alive. We go inside anyways.

There’s a lot of ghouls inside. All of them armed. Except for the glowing ghouls locked up in cages. On the other side of the chapel, there’s two ghouls flanking a giant mistake of existence shaped like a person. Athena goes up and talks to it.

This is Set. I hate Set and so do you. He says something about not working with normies but I can’t hear it very well over the sound of the vein throbbing in my head at the very sight of him. Then he tells Athena there’s some super mutants in town that he wants iced, and he’ll pay her and give her some info if she does it. I’m just clicking on things as fast as I can to get him to shut up, and Athena inadvertently agrees to it. He’s happy with that, then tells her that if he orders his ghouls not to fight her, the mutants will know something’s up, so even though she’s working for him, his men are still going to try to kill her and he’s not going to do anything about it. Because he’s a dick. He doesn’t care if she ends any of them, though. If they can’t kill her, they deserve it. Because they follow a dick.

Never mind what I said earlier. That isn’t a hard choice at all. Athena heads back into the sewers because that’s better than hanging out with Set. She follows a trail of dead bodies around a side path, and encounters a room with a bunch of rats in it. Here she has an epic battle that people will be talking about for ages. Just kidding, they’re rats. There is a funny moment where Tycho scores a critical hit for 1 damage against one, but other than that, nothing worth writing about. She kills them with slightly more effort than just thinking about it and moves on.

There’s a few really really big rats at the end. They take a few more hits to take down, but between her, Tycho, and Dogmeat, our group kills them all before any of them do any damage.

This specific tunnel ends pretty quickly, in a blocked junction filled with corpses, some of them relatively fresh. Seems the rats have been stockpiling them here. One of the corpses had a plasma pistol on him. We take it. If we had chosen energy weapons as our primary skill, this would be our first chance to get something going there, and even then, we’d only have sixteen shots before it runs dry. Both energy weapons and big guns don’t really come into their own until you get pretty far towards the end game. 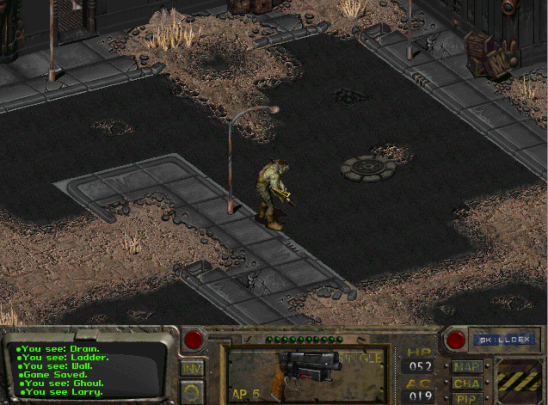 We take another path, reach the end of the sewers, and approach their water shed. Inside is the path to wherever they get all their water from. Their pump, their filtration system, all that. Outside is a single super mutant. He doesn’t bother us as we approach, but even so, we keep our distance. We can already see there’s a lot more super mutants inside.

And this is a good stopping point for the day. No, that’s not true. This is a horrible stopping point for today. But it’s where we have to stop. Because I need you guys to guide my hips right here. Once again, we’ve got a decision to make. Two of them, in fact. You get a bonus. So we need a vote.

The first decision we have to make is what to do about the super mutants. Set wants us to kill them. Offered to pay us to kill them. But Set is a dick. Now, the super mutants will try to stop us from getting our water chip, but they’re not too hard to get past with non-violent means. Then again, they are pretty wicked creatures, maybe slaying them would make the wasteland a safer place. But it would also make Set happy. And that’s not worth it.

The super mutants before us are strong, and a few are heavily equipped. This would be one of the tightest fights in the game, and this battle is a notorious companion-killer. Canonically, this is where Ian died according to material for later games, rather than way earlier against some random raiders as he did in our run. If you want to fight them, I can beat them. But we stand a very good chance of losing either Tycho or Dogmeat on the way.

Anyways, the second choice we have to us is a simpler one. The peaceful ghoul asked us to repair their water pump if we’re going to take their water chip, so they still have a source of water. But we don’t have to. Sure, we might end up condemning an entire city to death by dehydration. But we’d condemn Set to death too. And Set is a dick.

Anyways, two choices to make. Choose our destiny! Vote in the comments below!

Next time: Really, Set is a dick.

8 responses to “Night of the Living Fallout”