Hey there, hey there.  So, recently, your main man Aether played yet another visual novel marketed primarily towards girls who like all that touchy-feely romance stuff.  You know what that means!  Time for yet another Visual Novel Theatre.

So, our offering up today is the freeware novel Ristorante Amore from developer duo Cyanide Tea.  As you might guess from the title, it’s a love story.  I mean, really, pretty much everything is a love story at its core, right?  James Bond is almost always about him saving their girls as much as him saving England, Final Fantasy X wrapped up its world-saving plot in a big ol’ fantasy love story, Dark Souls was at its heart a tale all about how much I love hating myself.  This one’s just a little more up front about it than most.  It’s also really up front about screwing with my screencap capabilities.  We’re going to have to see just how far I can get by shamelessly ripping things off the internet.

Jumping right into it, the most notable thing about Ristorante Amore is the big twist at the end of the first act.  Which, in all honesty, the concept behind the twist is pretty neat.  You start the novel, and right away, you’re going through an utterly standard, blatantly clichéd romance story, the type that’s in like everyone’s first romance VN ever.  You progress through the story pretty quickly, then get to the end of the complete arc, and BAM!  Everything you thought you knew was wrong, time for the real story.   Kind of impossible to get into the real story without talking about that twist.  So, I’ll give you one chance.  If you’re going to be interested in Ristorante Amore at all, if there’s even the slightest chance you’re going to want to play it after reading this and you care about spoilers, go ahead and download it now and spend about 15 minutes getting through the prologue, and come back so you can have your precious little fresh experience.

So to bring you up to speed, because you totally didn’t check out the prologue of the game even though I was kind enough to give you the space to, basically the deal is that all your characters are actors in a clichéd otome.  The first act starts you out working through a really bog-standard romance story, that, I have to say, the writers put a surprising amount of attention into given that it only serves as the intro to the real story.  Then you get to the end, the curtain’s pulled back, the character you were playing as doesn’t actually exist, and the whole thing was all a show.  From there on, it puts you in the shoes of the coolest love interest from the prologue, and the game falls squarely into the slice of life genre.

So let’s just get the evaluation out of the way.  Ristorante Amore was a NaNoRenO game.  Which means it was made in just a single month, and I would guess it wasn’t touched or tailored outside of that.  Really, how much you enjoy this story depends on how cognizant you are of this fact and how much it means to you.  Cyanide Tea have put a huge amount of content, complexity, and quality into the work for only having a month to work on it.  But no matter how hard they worked, they were still trying to bring this to life in just a month, and there’s some birthing pains because of it, and those do drag the quality down below others that have had some more time to be completed.

Presentation-wise, the game’s pretty solid.  The backgrounds are quite nice and fit the style.  The characters are well designed, have a good amount of detail, and their faces are quite expressive.  I was really impressed that they put in the time to have the characters blink as they idle.  It’s just a small thing, but it looks really nice.  There are a few CGs, when you hit the romantic endings, which are… meh.  They’re not bad, but they’re not impressive either.  They don’t take away from the game at least.  The music choices are appropriate, but not particularly memorable.  In any case, the game comes off well.  Cyanide Tea definitely knew what they were doing here, and put in the time needed to get things looking good.  The main weakness with the visuals is largely just the lack of variety.  There’s only about five or six backgrounds, and each character, while their faces will change, is always stuck in the same pose.  The game’s not long enough that it becomes too much of a problem, and that largely feels a result of the limited development time rather than a lack of interest or ability, but it’s still worth mentioning.

The novel’s structure, both in the fake story prologue and the real meat of it, with a different route for each NPC character which takes the story in completely different routes.  In the main story, each of the four characters has a romance and friendship route, which are pretty much the same save for the ending.  Some people don’t take friendship very well.  It seems to work on a relationship values system when determining routes, with your choices up to the midpoint of the main story building points with a given character, the game shoving you into a specific route based on where your points are at when it comes to it.

The main irritation I have with Ristorante Amore lies in the way the plot treats the concepts going into it.  It’s obvious the developers had a few interesting ideas they wanted to try that just really fizzle out when they’re put into practice.  Again, I think that’s mostly the result of Cyanide Tea finishing the novel within the one month limit of NaNoRenO, rather than giving the time to properly implement these thoughts.  Like, the game is technically a sci-fi story.  All your characters live in Erewhon or something like that, a world in an alternate dimension that uses Earthling love as a power source.  This literally never matters to the story.  Ever.  It could have been excised entirely, and everything would be the same.  Except the story would be a bit cleaner.

The thing that really burns me, though, is that the game builds itself through the early bits on subverting your expectations, on setting up those clichés and then eating them, but once it gets going? All in all, it’s pretty standard.  The plot is competently done, for what it is, but otherwise breaks no new ground.  After the visual novel employing all your characters end, they have a brief break as they wait for their next job, while they all have something else to occupy their time, and their own personal issues.  It’s all just so, very domestic.  The issues, the personalities, the personal challenges, they’re all very down to earth, and very much things you’ve seen a hundred times before.  The designers make a point of challenging your perceptions, then they just drop the challenge on its face.  It sees the designers had their moment, their one twist, and were satisfied with that, and so spiked the ball short of the end zone.

The plot itself may not break any ground, but at least it’s functional.  Not going to wrap you up or anything, but it’s not a bad experience, either.  The writers show bits of promise, and you have a few high spots here and there, but it’s not quite enough to bring the plot out of middling level.  They’re good at managing detail, really good at working with the particulars of the visual novel format, but it’s just that the basics of the plot, the story elements, really don’t shine.  A little more creativity really could have helped there.  It tends to rush through the denouements of each character arc, as well.  All the work is spent building up to the romance, but when it’s time for that to come through, it just hits its points and leaves.  Again, probably a matter of trying to cram all the work into a month.

I did find their characterization above average, however.  Characters aren’t deep, partly because the novel is pretty short, but they are quite rounded.  With that in mind, let’s take a quick look at who we’re working with here.

Your PC through the prologue.  Utterly, deliberately clichéd otome protagonist.  Does not actually exist, which makes reading into her a bit of a pointless exercise.  Well, I mean, it’s a work of fiction, so none of these characters technically exist, but… Look!  Monkeys!

He played the princely defector from decadence with the overbearing family in the in-story otome.  Just some dude outside of it.  Your player character when the game actually gets rolling.  Doesn’t have much thought towards the future, but it seems the events he goes through here, whatever they are, do make him more mindful of it.  A little hot-headed, cares about his friends, was buds with most of these dudes for a while before they ever went into acting.  He doesn’t get explored as much as the NPCs, par for the course for a visual novel, but I found him to be the most interesting character here. 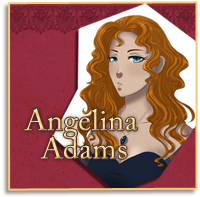 The romance option of choice for people who prefer hot chicks.  She’s a bookkeeper, on top of acting in visual novels.  Her story revolves around her concerns about not being hot.  When in fact she is hot.  The story treats her as if she’s some dowdy, plain looking woman when she’s not made up for the otome, but just look at her!  She was the rude spoiled competitor for Josh’s affections in the otome, while in real life, she’s… a little standoffish, as any bookkeeper will be, but pretty sweet overall.

Your best friend from childhood, and a frequent freeloader.  The romance of choice for people who prefer hot dudes.  The friendly big brother type in the otome.  He’s a famous model outside of it, on top of his acting duties.  A bit self-centered in real life, but he does really care about what he’s doing and those around him.  His arc revolves around some troubles he’s having with his career, and his secret hidden feelings for you that he’s been holding onto for ten years.  Doesn’t take it well if you don’t reciprocate but otherwise, a pretty fun guy.

No, that’s not right. 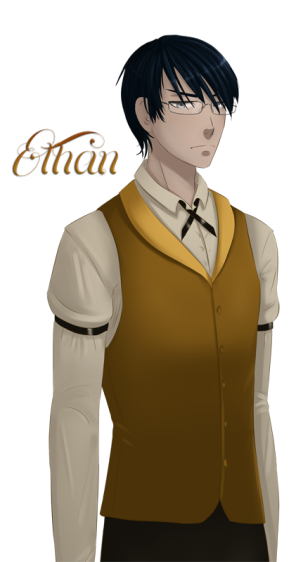 There we go!  So here’s Ethan.  In the opening otome, he’s pretty much every megane character you’ve ever seen.  Just some dick with glasses.  Apparently that’s attractive.  Outside of it, his personality is the complete opposite, meek and gentle.  He just looks like every other megane character you’ve ever seen.  Even he wonders how people find his character attractive.  He’s going to school, because he has glasses so he has to be the scholastic type, and is having trouble balancing that with the rest of his life. The romance of choice for people who prefer the shy quiet types.

Meh.  Laura’s kind of boring.  She’s the shy reserved character in the otome, your rival for Liam’s affections.  Outside of it, she’s a lot more open, but still not very interesting.  She’s some big black belt in something, but this never really matters.  Wants to take care of animals.  Has a big inferiority complex with her older sister, that you help with without doing much of anything.  The romance of choice for people whose favorite food is oatmeal.

So yeah.  That’s Ristorante Amore.  If you’re willing to give it a break for having been finished in a month, you’ve got a really impressive work here.  If you’re not, then you’ve still got a decent story with some good ideas, just a bit of flawed implementation.  Either way, it packs a lot into a pretty short duration.