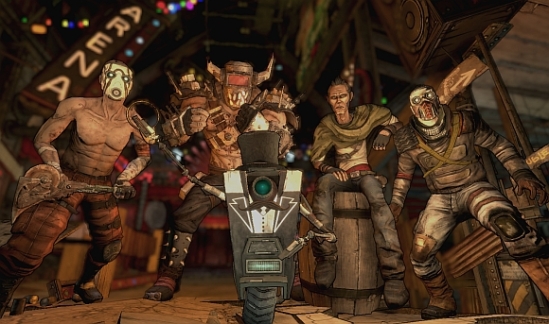 I’ve heard it said that the DLC is the best parts of Borderlands.  And I can see why.  The dev team really seemed to pick up their game when it came time for the Add-on content.  More humor and character shines through, you get a lot more variety in your enemies, the battles are more intense, and the game just seems more creative in general, like they’re trying out all the concepts they were too scared, inexperienced, or schedule-crunched to add into the vanilla game.  Really, taking all factors into account, I should be having more fun with the DLC than I was with the regular game.  But I’m not.  And that irritates me.  I was having a big, unlucky bandit-shaped blast with the regular game!  The DLC, on the other hand, is just something I’m kind of slogging through.  What I should be enjoying the most is making me stare at my screen in anguish.  And it’s all because of one simple reason.  It’s because the DLC keeps making me do the exact same thing every time I start it up.

See, in Borderlands, both base game and DLC, missions will send you all over the place.  You may have to collect 100 Bear Asses in one area, then go make some Soylent Green Brand Chunky Salsa in another area three loading screens away, then have to return to a third map in a completely different location in order to turn them all in.  In the base game, that works out just fine, thanks to the magic of Fast Travel!  You don’t have to worry about transit in between them, if that area’s already explored, you can be right there!  Not so with the DLC.  For whatever reason, there’s only one fast travel point per add-on, right at the beginning.  You’ve got to take the long way around to do anything.  Which, thanks to the amount of back and forth you go through, that enemies respawn every time you go through a loading screen, and that the simple act of loading a save takes you right back to the first area, means you spend a lot of time covering ground that’s already been tread.  With bullets.

Repetition is not engaging.  It’s not fun.  I know I can’t speak for every player, but personally, there’s few faster ways of causing me to lose interest in a game than making me do the exact same things I just freakin’ did.  In the Borderlands DLC’s case, the problem is that I every time I start a play session, I have to spend fifteen minutes to a half hour just making my way back to where I was at the end of the last session, walking in my own footprints, re-icing the guys I already killed, spending the same time I already paid last time around.  By the time I get to the content I want, I’m already bored, frustrated, and pissed off with the game.  Not exactly the feelings any game should want to instill.

Back when I was a cub, this kind of repetition was just a fact of life of gaming.  It was how almost any game punished you for losing, by making you play the whole blasted game again.  And it’s a really piss-poor way to handle it.    Video games deliver in a variety of ways.  Usually they’re fun and entertaining.  Sometimes, they may be touching and enlightening.  At other times, they may instill a feeling of triumph.  But however video games find their value, it never benefits from making the player do the same thing, over, and over, and over again.  There is nothing to gain from redoing a good job.  The task loses some of the fun factor, becoming more and more dull every time the player has to repeat it.  The story will absolutely lose its pacing and impact when the player has to go through it again.  And it’s hard to feel triumph by overcoming an enemy you’ve already beaten.  You will never be able to add to the experience by making the player re-cover the same ground.

Game designers have recognized this for a long, long time.  It’s why Super Mario Bros. had that simple  “re-start from the world you’re on” cheat I could never work out.  It’s why Mega Man gave you a password every time you ended a level, whether victorious or not.  It’s why the Legend of Zelda had the capacity to save.  And fast forwarding through the history of gaming, it’s why check/save points, fast travel, and so many other convenience features exist in games today.  As I mentioned in a recent comment over at Red Metal’s house, I think that’s one of the biggest advances the medium has made, in that games have cut down on how much it requires the player to cover the same ground.  Game designers still have plenty of hiccups in implementing the philosophy, however.  And it almost always hurts these games when it comes up.  I’ve had an excellent time with Borderlands.  The DLC should be even better.  Yet I can’t load it up without having to grind my way to the content I actually want, and it’s killing the game for me.