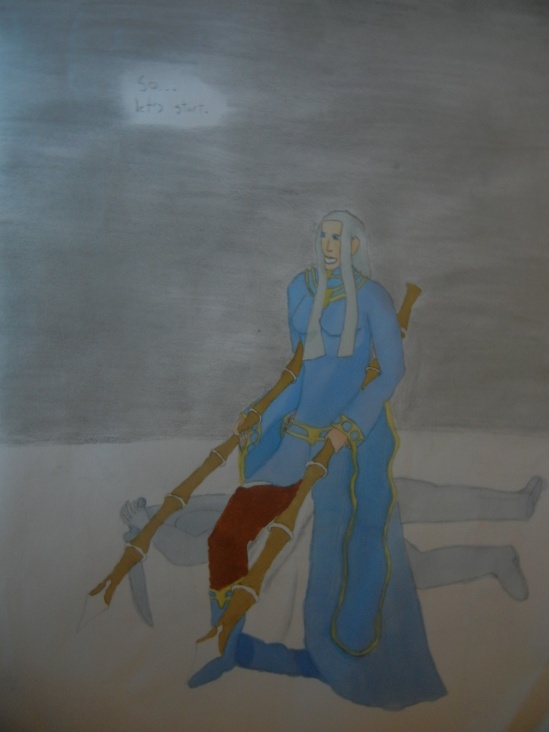 Would you look at that?  It’s like a magical fairy came to my world and brought me the mystical voodoo that is 1950’s Technicolor!  And wouldn’t you know it?  That’s pretty much exactly what happened!  That magical fairy has a name, one we know well here at Lost to the Aether.  And that name is Mishka Jenkins, Author Extraordinaire.  The whole thing.  Appellation and all.  Pretty sure she legally changed her name to that, as some point.  Anyways, Mishka got me a set of really nice markers, and this was my first try taking them out for a spin.  I had no idea how to use them properly, and I think it shows in this picture, but I’ve busted the markers out a few times in the creation of this graphic novel, and I think I’ve been getting better each time.  In particular, the pencil lines really aren’t meshing with the ink here, and I think the color visuals vastly improved once I picked up better inking equipment

One thing I don’t think anyone but me will really notice, but Lorelei’s hair color completely changed, with the advent of color into our work.  Even in pencils, it was a much darker shade the last two pages, because I imagined it as being a dark brown but it stays this light blue from now on.  Models keep evolving, if you let them

There’s a lot I could complain about this, and a lot I want to, really, but instead, I’d like to take a moment to point out that Lorelei’s hands in this image?  Almost flawless.  Given that I was really wanting to work on hands in this learning-to-art adventure, I was really happy with those.