I’ve been staring at Rogue Legacy for a while trying to will myself up to playing more. I’ve dropped a good length of time into it, and I despise starting games and not finishing them. To beat the game, though, I’d have to play more of it, and that’s something I really don’t want to do. I hit a speedbump in the game, stuck on the third boss. I can think of ways that might get me through it. I could alter my runes to better suit the challenges the boss is presenting. I could grind to get my stats up. I could just keep training against the boss until I get it right. All I have to do is click the ‘Play’ button in my Steam overlay. But I don’t wanna. You can’t make me.

And it’s not like the game is meritless, either. I can see how people would have fun with this. Hell, I was having fun with it for a while. It’s got a clever concept. It’s got charm. It’s got some decent mechanics. Yet those have all worn thin on me, and I’m only halfway through the game. 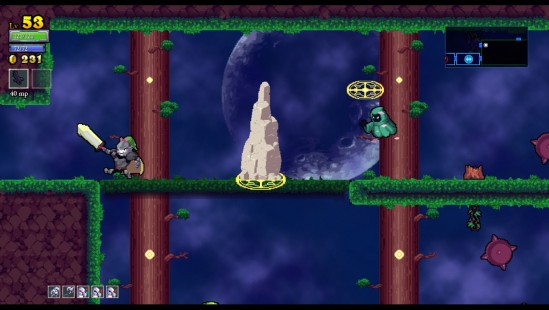 For the uninitiated, the idea behind Rogue Legacy is thus: you control a warrior whose family has been tasked with conquering a randomly generated castle. Your character fights his or her way through the castle, seeking to defeat all the bosses and open the door to an unspecified goal, collecting money all the way. When you die, and you will die often, your character leaves all their gold and equipment behind, which is then used to upgrade your chosen randomly generated member of the next generation, who tackles the randomly generated castle once more. Each member of the family bears a random class, sub-weapon, and genetic trait. The genetic traits alter various things, such as making you fire spells backwards to making your character twice as large as usual to telling you you’re receiving 100 times as much damage as you actually are. As a whole, the game bills itself as a Roguelike action-platformer.

I say ‘bills itself as’ because that description may not quite fit reality. Oh, it’s certainly an action platformer, but it’s got about as much as common with the original Rogue as I had with my last date. The developer website insistently calls the game a Rogue-”Lite” but even that may be stretching the truth a bit far. I know the term “Roguelike” has a definition that’s the subject of much internet argumentation, but Rogue Legacy only really fits the loosest of them. There’s a lot of elements that go into a traditional Roguelike. Some of the commonly accepted ones include:

So now that we’ve established that list, how does Rogue Legacy stack up? Well, you’re crawling through a randomly generated dungeon, and it’s pretty hard. That’s about it.   Persona 3 and 4 fit those exact same specifications, and nobody’s trying to pass them off as Roguelikes.  Pretty shameful for a game that invokes the original Rogue in the blasted name. You might think I’m missing something from the list. You might think that the randomly generated characters might change the way you play the game between attempts. Not really. Oh, the class are definitely different, and the changes of subweapons may have some affect, but none of them actually changed the way I played. I always fought the same way, navigated the dungeon the same way, and in general handled the game the same way no matter what my character was. Even the genetic traits barely have a significant effect on the game.

Of course, not being a Roguelike doesn’t mean it’s a bad game. Just victim of a bit of false advertising, that I wanted to point out.

I’ve got two main issues with the game. Now, I’ve beaten the original Dragon Quest a couple of times over. I used to love old-school RPGs. Hell, I spent most of my high school years playing MUDs, and those games are nothing but grinding and middle aged men pretending they’re nubile teen girls. So when I tell you that Rogue Legacy is one of the grindiest games I’ve ever played, you know it means something.

Just like in real life, everything’s about the money. You get gold for smashing stuff, defeating enemies, and opening chests. That gold is then used to get your equipment or upgrade your castle, which levels up all subsequent members of your family and unlocks new classes, bonuses, etc. The bosses are true tests of skills, but for the rest of the enemies, the 98% of the game? Stats are king. If you don’t have the stats to handle them, the enemies will wear you down, no matter how good you are. And for stats, you need to plunk hours and hours into getting gold. Hell, for a lot of runs, that was my main goal. If I beat the boss, yeah, sure, that would have been pretty cool, but I was just jumping into the castle for the gold. They’ve got an entire class geared entirely for grinding, for Geezer Zeus’s sake!

Grinding can actually be a powerful motivator. Rogue Legacy has an absolutely delicious Skinner box. Unlocking new things feels rewarding, and most of the time a half-decent run can get you something. It eventually runs out of steam, though. At this point, the only reasonably priced upgrades I have left are basic stat improvements, and those are cool an all, but I miss stuff like unlocking the secret Ninja branch of the family.

My second problem is that the mechanics of the game and the gameplay itself don’t quite seem to mesh. In fact, I’d put money down that at least once during development, the team rethought what they were working towards and made alterations to the base concept of the game while still keeping a bunch of old code. With the tools you’re given, you’re able to do one thing, but the game is asking you to do something slightly different. 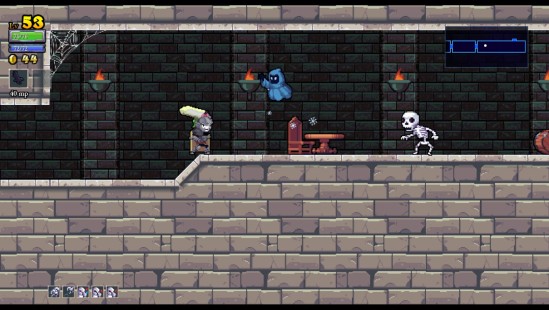 But hey, what’s wrong with that? Castlevania’s pretty awesome, right? Yes, yes it is. I love me some old-school Castlevania. But when you think back to Castlevania, what do you remember? A slow-paced action game based on placement and enemy prediction with only minor platforming elements, I’d bet. Rogue Legacy, on the other hand, is a fast-paced action platformer with heavy emphasis on evasion that can get rather bullet hell-esque at times. The mechanics ripped from Castlevania aren’t quite cut out for what the game’s asking you to do with them.

Oddly enough, the mechanics do work out pretty well for the platforming segments. There’s enough floatyness to the controls that it’s really easy to pinpoint exactly where you’re going to land, and with the proper runes you handle like a dream in mid-air. It’s the combat where it really falls apart, where the Castlevania controls don’t mesh with the game. The big one is just in weapon distance. Take a look at this picture:

You see how long Belmont’s whip is? Two to three times the width of the character. Now take a look at this picture:

It barely clears the character’s width. This gives you very little margin for error. In fact, the enemies that you can’t knock back are the hardest in the game, as there’s almost now way to strike them and get away cleanly. Now keep in mind that your character pauses for a split-second to wind up before each swing. I’ve lost count of the times I’ve gotten hit after I pressed the attack button but before the sword came down. Also keep in mind that your character has no momentum, so it’s next to impossible to accurately place yourself at proper striking distance to your enemy. If you’re not at the right range, well, tough cookies. Adjusting will either get you hit or put you too far away.

And… wow, all that makes it look like I absolutely hate the game. I don’t. It does have some things going for it. You might even enjoy it, if you have more patience than I. It also has some failings that overshadowed the whole experience for me. So… that’s that.