I’m still alive. I know you were probably wondering about that, given how long it’s been since my most recent post. Well, yeah, still here. I’ve been fighting long work-weeks, the flu, and two other posts that are taking more time than I expected to finish properly, hence why you haven’t seen much life from me lately. But we’re going to change that right now! We’re back baby, yeah!

So here’s a topic I’ve been mulling over for a while: what exactly happened to video game music? At least in broad market AAA titles, a game’s music barely seems worth noticing. It wasn’t always this way. Whistle the first two bars of the Super Mario Bros. theme, and any gamer who’d even touched that game will be instantly brought back to to those memories. It’s a very distinct and memorable song, that perfectly captured the mood of World 1-1. And they did that using only a small selection of bleeps and blorps. Compare that to Skyrim, where outside of the main theme and its various remixes, they didn’t even bother giving most of their music melodies. Most of the background music is simply long chords. It’s basic, incredibly boring, and most of the time you’d probably have to be reminded that there was music playing in the first place. Skyrim is definitely the worst case I can think of right now, but other modern AAA games aren’t much better. Think of Mass Effect 3, where most of the music was an incredibly simple one- to two-bar melody played repeatedly over basic chords. There’s no progression, the song doesn’t lead anywhere, it’s just kind of there. And it’s seeming to me that most games aimed at hitting the mass-market are doing the same with their music. Think of a modern AAA title you’ve played. Can you even remember more than one song from the game? Music is one of the strongest weapons in a game developer’s arsenal towards guiding the player’s emotions, and the tools to implement music in games are better than they’ve ever been before. There are definitely great composers in the video game industry. Why is it then, that the titles that are getting the most attention are getting the worst music? I don’t know for sure, but I’ve got a few ideas under the cut.

END_OF_DOCUMENT_TOKEN_TO_BE_REPLACED

Every form of art, every bit of media, every story told, it all relies on the reader’s interpretation. That’s just how these things work. Everyone has their own personal lens through which they view these things. Stories do have different depths, of course. Something like George Orwell’s Animal Farm is meant to be analyzed at a far deeper level than the average Jason Statham face-kicking action movie. They both still require interpretation to get their point across to the viewer. Every artist has to leave it up to the viewer to interpret why it’s OK for Jason Statham to kick all those faces off, why his face-kicking cause is a noble one, and why kicking everyone’s face is going to help him achieve his goals. Thing is, it’s impossible to tell how one random person is going to read things. Everyone has their own unique set of experiences, preferences, morals, etc., and that colors they way they absorb this sort of stuff. Everyone’s going to read a story just a little bit differently. All the artist can do is put their content up there and hope the viewer is going to read it the way they expect.

Stories are what the reader reads, not what the writer writes. That’s just the way they work. The writer can use all the pretty prose and flowery phrases available to them when writing the perfect content to get across their point, but no matter how well crafted they are, words on paper are still just words on paper until the reader absorbs them. And readers don’t always read things the way the author intends. Those pesky consumers are always applying their own perspectives to what the artist lays out. It’s a beautiful thing, though. That’s what makes morals hit home, makes art more than just ink on a page or lights on a screen, makes stories apply to you personally. But what happens if the writer intends one thing, and you see another? Or what if the filmmaker intends something simple, while you find something deep and grandiose?

END_OF_DOCUMENT_TOKEN_TO_BE_REPLACED 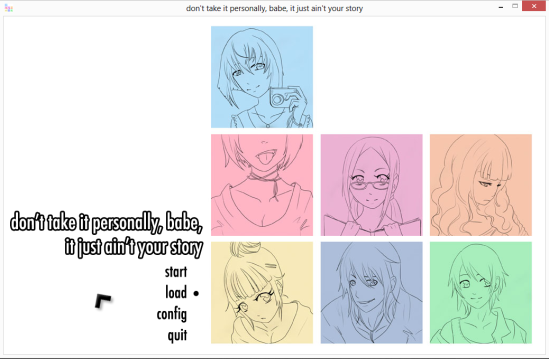 Heading back to the Christine Love visual novel well a second time, I recently made my way through the tangled romances of high school in don’t take it personally babe, it just ain’t your story.  Yes, that’s exactly what it’s called.  Capitalization and all.  My spelling is prefect, don’t question me.  dtipb,ijays is a spiritual successor to Christine Love’s earlier work,  Digital: a Love Story, which we reviewed here.  Like Digital, it can be downloaded for free here.  As a spiritual successor, it hits a lot of the same themes as Digital.  It’s about love, and the way the internet is used, and inter-character relationships drive most of the plot.  However, the way diptb,jiysa delivers on those themes is radically different than its predecessor, and in my opinion, a lot stronger.

In this game, you play the role of John Rook, a twice-divorced 38 year old man who lands a teaching role at Lake City Academy, a private American High School that apparently has only seven students enrolled.  Well, saying you “play the role” of Mr. Rook is stretching it a bit.  pdibt,ayisj‘s storyline is a bit more flexible than Digital’s completely linear plot was, offering you the chance to push a variety of characters down a few different paths and having three different endings, but you’ve actually got very little input over Rook’s actions.  Whereas the main character of Digital did nothing without you pressing a button for it, John Rook is his own man.  Your only affect on the game is occasionally choosing which of two or three conversation options to take.  It’s not a bad thing.  If you go into a visual novel expecting to be able to bend the plot to your whim, you’re going to be more disappointed than I was when I was 5 and I learned my “Mickey Mouse’s Underwear” joke wasn’t funny.

Anyways: you=John Rook, teaching english literature at Lake City Academy.  You have seven students in your one class.  Maybe there’s more, but they’re never relevant to the plot so the game doesn’t bother to mention them.  However, as the title mentions, this just ain’t your story.  The story’s really about your students and the various juvenile romantic entanglements and personal problems high school always involves.  Rook’s role is to take the bishop pawn and help the black queen put the white queen into checkmate within three moves.  Oh wait.  What were we talking about again?  Right.  btipd,jsayi takes place in a world were high school students actually talk to their teachers.  Voluntarily even!  So your role is to help your students work out their personal issues with love and… well, mostly love.  Or, you could use your power to make sure everyone dies friendless and alone.  If you’re a dick.

But you don’t go into your matchmaking services without help.  Oh no!  The school, in order to curb bullying, has given teachers full access to its students social media profiles and private messages!  So you get every opportunity to spy on your students and learn that Jake is so dreamy but Rebecca’s already got dibs on him so I think I might try to move on his best fried Zack but oh he does that weird thing with his knuckles that’s soooooooooooo gross I don’t think I can go through with it.  Obviously, there’d be some pretty big issues if the students found out that their worthless gossip spread outside their circle, so you have to keep your ability to read every private issue a complete secret.

END_OF_DOCUMENT_TOKEN_TO_BE_REPLACED

So Dead Space 3 comes out in a couple days.  Sometime between February 5th through the 8th, depending on which country you call home.  For most of the lead-up to the game’s launch, I found it hard to care.  Nothing against the game itself, the series just never appealed to me.  Never seemed like it would push my particular buttons.  And this third game in the series seems like it would be no different.  I’m sure some people might like it, but it’s just so far outside my gaming sphere that nothing EA’s marketing does could get me interested in the game.

Instead, it seems to be something the developers did that got me interested, and not in a good way.  Dead Space 3 is going to have microtransactions, imported directly from all those free-to-play games you’ve probably never tried.  Essentially, these have you paying real world money for some sort of in-game resource.  Sometimes it’s time, where you don’t have to wait for something to happen.  Sometime it’s resources, as in this case, whether in-game money or crafting material, or something of that sort.  Either way, what I’m getting at is that microtransactions are essentially you just paying money to get the computer to change a number.  It’s not DLC, because you’re not paying for any new content, what you are paying for is something that you could get otherwise within the game, were you just to put in the time or energy.  Like I said, really common in free-to-play titles.  A lot less common in games that you have to shell out full price for.

I’m not going to say it’s a bad thing in these “hardcore” games, or that anyone’s in the wrong for buying into it.  Each individual player will have to make the choice as to whether it’s worth it or not.  It’s not like this is a new phenomenon either.  Mass Effect 3 had microtransactions for its multiplayer weapons.  Tales of Vesperia had microtransactions for levels and basic items.  This is a practice that disgusts the gamer in me, and I’d hate to see it take root, but the businessman in me understands it.  After all, Dead Space 3 has infamously had a massive development budget, and for whatever reason EA’s marketing isn’t pushing the game nearly as strongly as I thought they would.  They’ve got to make up for it somehow, and giving players the choice of paying money if they wish to get these resource packs wouldn’t be that big a deal, so long as the game didn’t actually require it.  Between the gamer and business perspectives I have, I’ve kind of found a bit of balance, that of just idly hoping the microtransactions flop.

Of course, it’s easy for me to have such a passive outlook on the issue, as I’m not actually invested in the game whatsoever.  I was mostly paying attention to these microtransactions because it’s created so much internet drama, and I do enjoy a good bit of butthurt. I was never going to bother saying anything about it though, until I saw this interview at GamePlanet with Visceral Producer John Calhoun.  Several of the things he says in the interview set off my bullhonky detector.  Normally, that’s the sort of thing I’d just quietly sit on and forget to care about after a couple of hours.  But now, I don’t have to! I’ve got a blog now!  If I don’t use it to share my random thoughts with the world, what am I doing with this thing?!  So we’re going to go over my perspective on a couple of the things Calhoun has said in that interview that just seem weird.