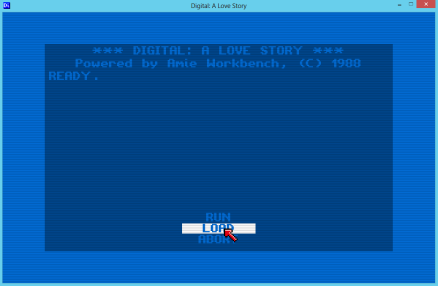 So let’s start with the basics, shall we?  Digital: a Love Story is an indie game written and developed by one Christine Love, billed as a romance/mystery.  It’s available for free here and it’s pretty short, so if you’re interested in the stuff I talk about in this review there’s really no reason to not give it a try.  It’s so short in fact, that I run the very real risk of spending more time typing up this review than I actually spent playing the game.  Digital: a Love Story is a visual novel, one of those things that we in the western world aren’t quite sure where they fit in the video game sphere.  You could call it an adventure game, if your one of those people that likes to combine the two genres.  I think the official test for adventure game vs. visual novel is whether or not you have to hit a yeti in the face with a pie.  You do not have to do that in this game, so I guess visual novel it is.

Digital is set in 1988, and takes place entirely on the screen of your computer, with all your interactions taking place over Bulletin Board Systems.  Supposedly, it’s all very historically accurate, but I’m not so sure about that.  I don’t remember 1988 very well, but I’m pretty sure computers were made out of rocks, and their proto-internet thing was really just a bunch of cans tied together by string.  Anyways, you play the role of Badman “Aether” Wargang.  It gives you the option to pick your own name and nethandle, so I suppose you could play someone else, but I don’t know why you would want to.  You are the lucky recipient of a brand new Amie computer, which comes equipped with a music player,a messaging system, a dial-up modem and… well, that’s about it.  Still, I’m sure that was the top of the line for 1988’s rock-based technology.  The dial-up modem lets you connect to your first Bulletin Board System, which works pretty much like our modern forums do.  You read topics, make friends, learn about other BBSs, and meet a girl.  You and that girl send messages back and forth for a while, before she decides to do… something.  It’s not exactly clear at the time, and I don’t want to spoil it now, so you’ll just have to sit on that.  Anyways, she decides to do something, and right before she does that something, she sends you one last message confessing her love for you.  Then she disappears and the BBS you both were using crashes.  And the Sysop for the BBS finds a cry for help directed to you in the wreckage of the BBS’s code.  And that’s where the mystery part comes in.  Using what clues you have, and what hacking programs your BBS friends can give you, it’s up to you to track her down. 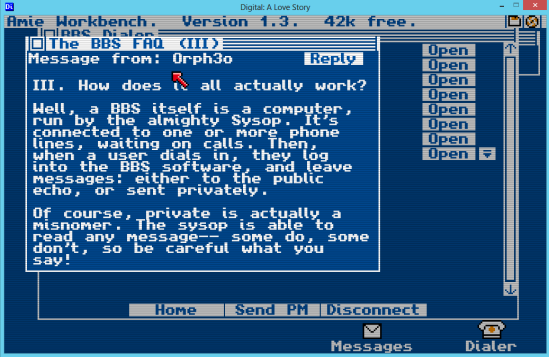 As a visual novel, the story is of central import to the experience, and I have to say that Digital: a Love Story owns its medium in pursuit of that.  I can’t think of a way this story would work outside of this format.  Connecting to and navigating the various BBSs is a very simple process, but one that I think really helps to get you immersed in the game.  Requiring just that little bit of interaction really helps it feel more real, and helped me get in the shoes of my avatar.  Considering that you never leave your computer GUI for the duration of the game, Ms. Love has done a really impressive job of making you feel like part of the world.  The various posts give you just enough to work with that the people making them actually feel real.  And just a little bit familiar.  Think of some of the random internet yokels you’ve met over the years, you’ll probably find something like one of them among the characters here.  The fact that your character is completely quiet helps, too.  I always appreciate a well-implemented silent protagonist, and Mr. Wargang here is a good example of how to get it right.  You never see the replies you’re making to various posts and private messages, but most of the responses to them are complex enough that I’d be surprised if Ms. Love hadn’t written out your character’s dialog anyway, for her own use.  Conversations feel like actual conversations, rather than having characters just monologue at you as seems to happen to a lot of silent protagonists.  There are a few missteps in the implementation, mostly at the beginning and end, but overall this approach really serves the story.

Now, I know there’s a burning question in your mind.  I can see it in your eyes.  It goes a little something like this:  “So, Aether, I know you’re a man who really puts the idea that women are the fairer sex to the test.  You must have a lot of experience with romance.  How does this really stack up?”  Well, I’m proud to say that the “Love Story” part of the title is completely accurate.  This is totally a story written by Christine Love.

Ok, I know, I know.  The thing is, the romantic aspect of this story is one of its weaker points.  One of the biggest problems, I think, is that there’s very little sense of time passing.  The first message you get from the eventual target of your affections, she’s so grateful that you’re not immediately obsessed with the fact that she’s a GURL ON THE INTERNETZZZZZ!!!!!!!!  Then two minutes later, you apparently ask her out.  She turns you down, but five minutes after that, she’s confessing her love for you.  It’s apparently been days of in-game time, but you’ve got nothing telling you that, it’s all one contiguous screen for you, and with no way to tell how much time’s supposed to have passed, her frequently changing mind just seems weird.  The “love” does motivate you for the mystery portion of the game, but really it serves the story more as a tool than as a central theme.

The story is almost entirely linear, mostly just reading posts, then replying to those will unlock some messages to read, which will unlock some more posts, and on and on.  Occasionally, you’ll download some script kiddie hacking tool or some other program, but the uses for those are usually pretty obvious.  There are two puzzles that are going to require thought, however.  Both of them seemed to me to be well integrated into the game, providing a bit of logic to work through without really derailing the plot, and both had hints as to what to do in older messages on the board, so it’s not like the game left you high and dry if you couldn’t figure it out.  Actually, I think I would have liked to see a bit more of that.  Most of the time, the game served up the information you needed right when you needed it, whereas it might have been a bit more intellectually engaging to have bits and pieces peppered among other useless posts, requiring you to put the information you had together across multiple posts as the need for it becomes apparent.  As it is, if you’re ever lost on where to go, the answer is to usually comb the various BBSs reading the new posts and messaging everyone until the answer is handed to you.

Pacing is also a minor issue with this story.  The beginning is very deliberately paced; you start out just exploring your new online world, and the conflict was introduced right as I started getting bored with that.  The proper breadcrumbs are left early on, leading to a nice, measured path of discovery as you explore the net and find additional pieces of what’s going on.  Then you hit a point, and things start to feel rushed.  Most of the non-central characters stop posting and messaging unless it’s plot-vital, so you end up just jumping from plot point to plot point, one after the other.  A large chunk of the background information is passed off all at once, and never really followed up on before you have to get moving once again.  This isn’t a large problem by any means, and I still definitely enjoyed the story, but I kind of missed the slower pacing and greater communication with the characters.

Overall, it’s a really good experience.  Free, quick, good world, good writing, you could do a lot worse in an hour than play this game.  I officially award it 43 out of 5 points.  As for what that score actually means… I’ll get back to you on that later.  It’s really complicated.   I have to like, plug it into formulas and stuff, to make sure it’s as unbiased and scientifically accurate as possible. Still, the game is good.  It’s not going to convert you if you aren’t already into digital novels, but if you are, go ahead and give it a try.