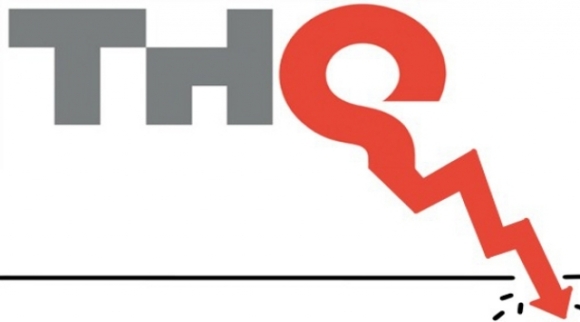 THQ, maker of the Saint’s Row franchise and a bunch of other games I don’t care about BUT YOU MIGHT has fallen on some hard times lately, eh?  Well, “lately” is kind of a polite way of putting it.  Truth is, they’ve been circling the drain since 2008.  But last year was an exceptionally eventful one for them!  Layoff’s, a change in power, a desperate move to keep from being de-listed from the stock exchange, it’s been rough times.  And now, it’s coming to a head with this bankruptcy.  And bankruptcy is nothing anyone wishes on them.  Well, unless you still hold a grudge for 50 Cent: Blood on the Sand or something.  Anyways,  we’ve been getting all sorts of conflicting messages from them.  President Jason Rubin says everything’s going to be fine, thank you for asking, how are you?  If you take the statements he was making at the time the bankruptcy was announced, they’re just hitting a rough patch, and they’re going to come through it harder, better, faster, stronger than ever!  On the other hand, THQ’s creditor’s and the general games journalism sphere don’t seem so optimistic.  So what’s really going to happen?  If only there was some incredibly smart business/video games blogger around that could enlighten all of us.  Well, truth is, it’s really hard to say just yet.  I may be incredibly smart, and I might end up blogging about business and/or video games, too early to say just yet, but right now, THQ’s at too uncertain a place for true enlightenment.  I can attempt to help you understand the situation  better, though.  Would you like that?  No?  Well I’m gonna keep typing anyway!

So lets start with the basics.  Bankruptcy is when you’ve borrowed too much money, most likely because of women or drugs, and now you can’t pay it back.  Also probably because of women and drugs.  So if, after you’ve tried everything you could, called in your favors, done things that have earned you an arrest warrant in New Hampshire, and your debt is still overwhelming, you go to the government for protection as a last resort.  Now, there are a couple things that protection earns you, but the big one is a temporary stay on any sort of lawsuits, so essentially your creditors have no real power to force money from your hands.  Now, that protection comes at a cost, which is why bankruptcy is a last resort.  What cost?  The depends on what type of bankruptcy you file.

There are a couple different types of bankruptcy, but the two common types for corporations, and the only two that really matter here, are Chapter 11 and Chapter 7.  Normally, under Chapter 11 you get that temporary stay on debt litigation, and you have to get together a plan for improving your business and paying back your creditors, approved by the court and every other stakeholder organization the court deems important enough.  You reorganize your company free of the creditors always on your back, and you have the ability to just cancel any contracts that aren’t good for you.  Businesses can also be sold under Chapter 11, though I don’t pay close attention to bankruptcy proceedings because they’re boring unless I’m writing about them, so I can’t think of any other specific cases now where that’s happened.  Anyways, the important thing here is that, even though the stock price tanks and your fate is left in the hand of the courts, the owners still retain control of the organization, and there’s still hope of coming out alive on the other end.

In summary, filing for Chapter 11 bankruptcy is something like this: 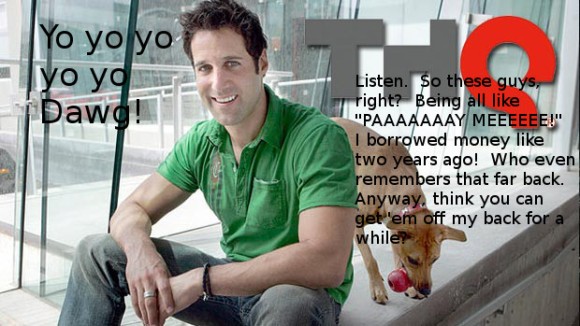 Chapter 7, on the other hand, is where businesses go to die.  Top control of the business is placed in the hands of a trustee, the organization is split up, and it’s component parts are sold to the highest bidder.  Chapter 7 usually follows if the company isn’t successful with the Chapter 11 reorganization plan.  And… you know that really summarizes it pretty well.  I already made this picture, though, so I’m going to use it anyways.

If THQ went into Chapter 11 Bankruptcy, there’d be an 82% chance it’d be exactly like this: 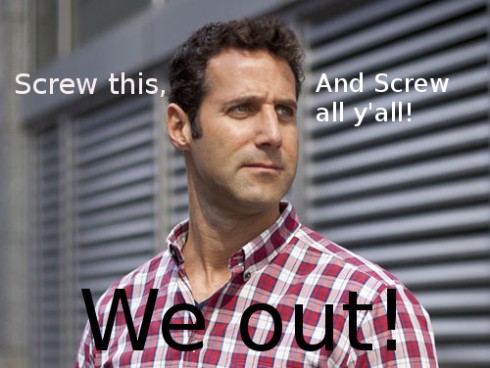 But they didn’t file Chapter 7, which is why Jason Rubin seems to still have hope.  Specifically, they filed Chapter 11, the promptly decided to sell the organization.  Like I said, not a situation I’ve too much experience with, but by my understanding, this lets them sell the business as a whole, if there are takers, rather than splitting everything up and all the pieces going somewhere different.  This way, most people would get to keep their jobs, THQ gets to keep doing what they’re doing while reporting to new masters, really, it’s much better for the company.  They’ve even got an interested party: Clearlake Capital, with that $60M stalking horse bid.

(By the way, stalking horse bid means different things depending on who’s saying.  Some people just call the first bid on a company a stalking horse bid, because finance is a very boring job and finance people need to spice things up somehow. Other people use “stalking horse” to refer to a bid made by another company to ensure that the company that their friends/connections operate isn’t bought for too cheap.  Either definition could work here, and the end result is probably going to be the same.)

So, things seem happy, right?  THQ gets bought outright, gets to keep making Saints Row and other games that might matter, jobs are kept, and everyone’s happy, right?  Right!?  You haven’t been paying attention to the news, have you?  It seems THQ was really happy with that situation, and so tried to rush it through with a thirty day window for other buyers.  Unfortunately, in bankruptcy proceedings, THQ’s happiness is not the priority.  It’s the creditors who really have to be fulfilled.  And they’re not.  And they took it to the judge.  And the judge put a big hold on THQ’s plans.

There are a couple issues that stand out to me, overall with THQ’s bankruptcy plans.  The first is the relative debt compared to THQ’s assets.  If the debt of an organization is higher than it’s assets when it’s time to leave Chapter 11 protection, the creditors end up owning the organization.  You recall the Humble THQ Bundle, and the big discounts they had on their collection for the Steam Holiday Sale?  I’d wager those were measures aimed at raising lots of money in the short-term.  And it doesn’t seem they’ve succeeded.  THQ still owes more money than they’re worth.  And the Clearlake Capital bid wouldn’t help that much, either.  I’m not going to go into details of what parts of the bid go to whom, because that’d make this post even more boring than it probably is to everybody but me, but I will say the creditors are getting seriously shafted by this deal.  I tried making a graphic for how the bid is for the debt-holders, but I couldn’t think of an accurate metaphor without making this blog completely NSFW.  You’ll just have to use your imagination.  Anyways, for the licenses it holds and the games it has in the pipeline, 60 million dollars for THQ is dirt cheap.  The third issue that comes to mind is that the 30 day window seems as short to me as it does to the judge and the creditors.  I don’t know how long selling a business under Chapter 11 takes, but I’ve seen small businesses go through Chapter 11 for months on end.

Anyways, in rejecting THQ’s plans, the judge also opened things up for THQ to be sold bit by bit.  I’ve also read that a trustee’s been appointed, too.  It makes me wonder if the court is forcing THQ into Chapter 7, business ending bankruptcy.

So, where are things going from here?  We’ll have to wait and see.  Auction opens up on January 22nd, so we probably won’t be getting much in the way on new news until then.  Warner Bros. seems real interested in parts of THQ, but they’ve already got a videogame division, so the probably won’t want the whole company.  If I’m lucky, the Saint’s Row IP and the Volition studio will both end up in the same place, but it’s seeming less and less likely that THQ’s going to come through whole and hearty after this.  Then again, this world does have a way of surprising you.